Dr. Luis Sera (ルイス・セラ, Ruisu Sera?) was a biologist native to an isolated region of Spain. He was recruited into Los Iluminados' research department to genetically-engineer Plagas and bio-weapons, and was ultimately killed in his attempt to undermine their efforts.

Sera was born and raised in an antiquated village in the mountains of Spain, which had shunned most modern technology in favour of an 18th-century lifestyle. Nothing is known of his family life or childhood beyond his grandfather, who hunted in the forest beyond the village.[2] Sera left his home behind to make a name for himself in the modern world,[3] and earned a degree as a biologist.

Dr. Sera later returned to the village as it was being taken over by Los Iluminados, a cult which worshiped a parasitic organism native to the area. The cult's Prophet, Osmund Saddler, used the cult as a recruiting tool for his real objective, the creation of bio-weapons for use in international terrorism. Dr. Sera led the genetic modification of the Plagas in an island facility, and had instructions to make them more difficult to overcome. During Dr. Sera's research, the various mutation effects one or several Plagas could have on hosts was investigated, leading to the El Gigante and Regenerador; further research into human-animal hybrids resulted in U-3, Verdugo and the Novistador.

When he became disillusioned with Saddler, and the research he was performing for him, Dr. Sera began planning his escape. With access to the internet, he attempted to contact a friend he met at university, hoping he would send help. Instead, he found himself in contact with Ada Wong, then a member of The Organisation, who had access to the friend's email after his death. The Organisation successfully infiltrated the cult with Jack Krauser, but would later send Ada Wong to serve as Dr. Sera's liaison. In his escape from the island, Dr. Sera stole a test tube containing an egg of the Dominant subspecies, which he was to hand-over to Wong.

Dr. Sera was captured by Fr. Bitores Mendez's forces as he made his way through the village, and was sealed in a cabinet to be interrogated later. Saddler refused to allow his execution until the location of the test tube was revealed. This opened up a window for his escape, when the decision was made to take him to a camp with fellow prisoner, Leon S. Kennedy, a US-STRATCOM agent sent to search for the First Daughter, Ashley Graham, who the group had abducted. Dr. Sera was aware of the operation, but refused to divulge his identity to Kennedy, instead claiming to be a police officer from Madrid taken captive by the group and overhearing their conversations. The two worked together on several occasions to subvert Los Iluminados and, with Graham, made their way into the castle of Ramon Salazar.

Unfortunately, Saddler eventually caught up to Dr. Sera and impaled him through the chest with his tentacle tail. Shortly before his death, Sera helped Leon giving him some pills to suppress the growth of the Plaga in his body, as well as leaving behind all of his research notes scattered throughout the castle and island complex.

Sera will join the player as an AI partner during the fight in the cabin during Chapter 2-2 of the main game. He will just use a Red9 handgun to fight with. Occasionally, he will toss Leon various items exclaiming; "Here, use this!". Sera will duck to avoid friendly fire whenever the player aims in his direction.

If the player hits Sera enough times, a special cutscene will trigger wherein Sera says "Adios Leon!" (Goodbye Leon) and shoots Leon twice, resulting in the game over screen. This will also occur if he is hit with the knife enough times. Therefore, the player must exercise caution when using hand grenades around him. Sera is immune to having eggs thrown at him.

Luis' Bottle Cap from RE4

Leon and Luis being tied together

Luis in the Trial Edition 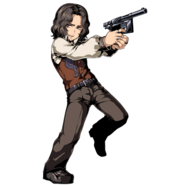 Luis in Clan Master.
Add a photo to this gallery

Retrieved from "https://residentevil.fandom.com/wiki/Luis_Sera?oldid=811483"
Community content is available under CC-BY-SA unless otherwise noted.