Start a Wiki
watch 02:27
The Loop (Games)
Do you like this video?
Anderson universe
(Covers information from Anderson's universe)

Luther West was a survivor of the global outbreak of the t-virus, serving as the apparent leader of a group of survivors (Bennett, Kim Yong, Crystal Waters, Wendell, Angel Ortiz and Chris Redfield) hiding in the Citadel Correctional Facility. His weapon of choice was a Taurus PT92.

A former pro basketball player, Luther is strong and athletic and displays leadership skills. He helps the other survivors stay alive, but does not trust Chris, believing him to be untrustworthy and a killer, so he keeps him confined to a cell.

When Alice and Claire arrive at the prison, he is aided by the other survivors in the attempt to keep their plane from falling off the roof. Afterward, he acts as a guide for Alice and Claire, helping them settle in with the others.

During the Undead attack on the prison, he is finally convinced by Alice to allow Chris out of his cell in order to help them escape. Luther and Claire attempt to keep the Axeman from breaking down the main gate, but were unsuccessful.

The group eventually retreats to the prison shower room, where he and Chris entered a tunnel network beneath the prison carved out by the Undead. During the tunnel escape, he was attacked by the Undead and presumed dead by Alice, Chris and Claire (the only survivors, besides Bennett, to escape the prison).

Near the end of the film, it is revealed that Luther managed to survive the attack and escaped through one of the storm drains leading to the ocean. He emerges in time to watch as a fleet of Umbrella planes fly overhead toward the Arcadia.

Sometime after the events of Afterlife, Luther is recruited by Albert Wesker to help Ada Wong, Barry Burton and Leon Kennedy break Alice out of the Russian underwater Umbrella facility, under the control of the Red Queen. Before entering, the team sets explosives near the entrance of the facility which will detonate after two hours, killing anyone still inside. Wesker's team plan to work their way through the simulation of Moscow and meet up with Alice and Ada in the simulated Raccoon City suburbia, the same area that "suburban Alice" and Becky live in.

Luther and the others are stalled in Moscow by a large number of Las Plagas Undead, who are more intelligent than the usual Undead, wielding heavy artillery. During the battle, Leon is nearly killed by an Undead wielding a chainsaw, but Luther steps in and kills it, saving his friend from an untimely death. They manage to kill the gun-wielding Undead and proceed further into the Moscow simulation when they are attacked by an Uber-Licker who kills their navigator, Sergei. The only survivors of their group, Luther, Leon and Barry fight the creature back long enough for Alice to intervene with a Rolls Royce that knocks the Licker into a building.

A chase through Moscow ensues, the survivors pursued by several Undead and the Licker. They manage to evade the creatures, crashing the car down into the subway and causing a cave in that blocks the Licker. Reunited with Rain and Becky, the six reach the elevator that takes them to the facility's submarines they could use to escape but the power to the elevator is suddenly shut off.

The group is attacked by Jill and several Umbrella soldiers; Luther is injured during the fight but manages to keep it together, holding the Umbrella forces off while Alice goes to rescue Becky (who'd been captured by the Licker after it killed Rain). During the firefight, Barry sacrifices himself to allow Luther and Leon to escape the facility before it's destroyed by the explosions. The two survivors are reunited with Alice and Becky as they reach the surface. The underwater facility is destroyed in the explosion, however, as they depart, their vehicle is overturned by a submarine that surfaces. Jill and Rain emerge from the transport with Ada as their prisoner. However, the spy is rendered unconscious and Rain - powered by the Las Plagas parasite - engages in battle with both Leon and Luther.

Though they fail to match up against Rain's new found strength, the two men hold their own. When Luther attacks Rain with a fire extinguisher, the brainwashed clone takes extreme offense and focuses her attention on fighting Luther. Halfway into the fight, Rain lands a single blow to his chest that stops his heart and kills him.

Luther served as the leader of the Citidel Correctional Facility survivors and was greatly admired by them, he had an energetic streak mainly due to being a former basketball pro, he had an ability to see whether someone was a killer and who wasn't, such as he was able to tell Chris Redfield and Alice were people who had killed humans as well as the Undead, and when he and Claire were trying to reach Bennet, he begged Kim Yong to not go through with it, seamingly knowing that Kim was innocent in Angel's murder, it has been shown that (at least once) he is capable of being scared, such as when he and Claire tried to keep the Axeman from breaking down the gate and failing to kill it with several shots to the head, Luther shakingly asked, "What the fuck is that thing?!"

Luther has been proven to be the most agile in the prison group. Since he was a former basketball pro, he has shown to express agility, this is demonstrated in Afterlife when he "slam dunks" on Alice's plane, and in Retribution, when he took on the Las Plagas Undead. Due to the outbreak, he is forced to learn how to shoot firearms, and is effective.

Luther wears a black Nike Air Jordan Tight Tank Training Top and black warm up pants, which his gun resides. He wears black sneakers and black wrist bands. His head is bald and has a shaved/styled beard.

Luther wears a black Tight Tank Training Top, which he hooks holsters for guns to, black sweat pants and sneakers. His arms have long leather arm-bands. For protection from the ice field, he wears a hat and coat. His facial hair and hair style is the same as Afterlife.

Luther West as he appears in Resident Evil: Afterlife.

Chris and Luther shooting at the Undead. 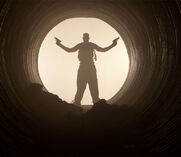 Luther as Bennett steals the plane

Luther watches the fleet of Umbrella aircrafts heading toward Arcadia

Luther smiles as he hears Alice's comment.
Add a photo to this gallery

Retrieved from "https://residentevil.fandom.com/wiki/Luther_West?oldid=763387"
Community content is available under CC-BY-SA unless otherwise noted.