The M92F (HG) is a weapon featured in Resident Evil 5 and the first handgun to be acquired in-game.

This weapon isn't required to be purchased as it is found in the starting chapter. However it can still be bought at the store for ₦2,000.

It has the weakest firepower of all the handguns. But it has a high critical ratio when fully upgraded, and the large capacity of one hundred rounds cannot be ignored.

It costs 6,000 Exchange Points to buy infinite ammo for the weapon. Fully upgrading this weapon will also unlock the M93R to be purchased from the store.

The M92F (HG) is the default weapon for Chris and Jill in the Lost in Nightmares side game. Also, after the duo lose their equipment, another pair of these guns are found just before they encounter Albert Wesker. The weapon is also Josh Stone's default weapon in Desperate Escape. 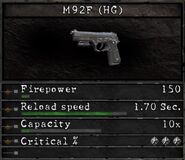 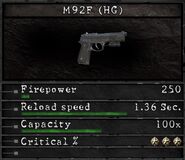 Chris Reloading The M92F
Add a photo to this gallery

Retrieved from "https://residentevil.fandom.com/wiki/M92F_(HG)?oldid=811815"
Community content is available under CC-BY-SA unless otherwise noted.