The Machine Gun AUG is a weapon featured in Resident Evil Revelations. It is found in the Episode 5: Secrets Uncovered, right after the player obtains the Restart Key.

In Raid Mode, the stats are the same as in Campaign mode but the firepower is weak with the Machine Gun MP5 and the High-Roller's being superior in it. 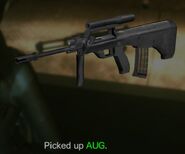 AUG location
Add a photo to this gallery

Retrieved from "https://residentevil.fandom.com/wiki/Machine_Gun_AUG?oldid=811936"
Community content is available under CC-BY-SA unless otherwise noted.