Resident Evil: Revelations
The Machine Gun G36 is a weapon featured in Resident Evil: Revelations. This assault rifle seems to be the primary one issued to the BSAA as Chris, Keith and Quint are equipped with it. In Campaign, Jill can acquire it in the Customization Benches after reuniting with Chris. It has a slow firing rate but compensates it with high firepower. It has a default firepower of 140, a firing rate of 0.75, 30 rounds capacity and 4 customization slots.

In Raid Mode, the stats vary depending on the level but overall, it has a slightly lower firepower and is usually seen having less than 3 customization slots. At its best, the G36 will have 5 slots with a green name (untagged), its rare tag is called the "Aggressor".

The Machine Gun G36 has 4 customization slots in Campaign. However it cannot be equipped with a Custom Part that increases its firing speed. It is recommended to fill each slot with these Custom Parts:

In Resident Evil 6, a gun with a striking resemblance to the G36 can be seen used by the owner of Berke's Gunshop and the police officer in the same sequence. (Leon's Chapter 1) 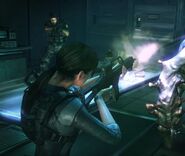