watch 04:21
Wiki Targeted (Games)
Do you like this video?
Play Sound

yes
The Machine Gun MP5 is a weapon featured in Resident Evil Revelations. It is found in a locked room in the bilge before the battle with Rachael. The locked room can be opened by the Iron Anchor Key.

The MP5 has the second highest rate of fire and the second lowest damage, with a base firepower of 110, a rate of fire of 1.67, a capacity of 50, and 3 customization slots. This weapon has no piercing power, like AUG and G36 have.

In Raid Mode, it's stats varies depending on the level. It has the second highest firepower, fast firing rate and large capacity.

With the Machine Gun MP5 having 3 customization slots and a large capacity, it is recommended to equip each slot with a Custom Part related to firepower and stopping power. The recommended custom parts are: 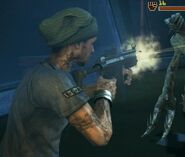 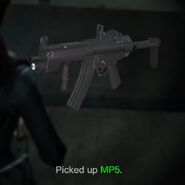 Add a photo to this gallery
Retrieved from "https://residentevil.fandom.com/wiki/Machine_Gun_MP5?oldid=584643"
Community content is available under CC-BY-SA unless otherwise noted.