Machine gun ammunition is the ammo used for the different types of Machine guns (and sometimes assault rifles too) in the Resident Evil series. Some RE games depict ammo in magazines, other games show them as boxes.

PSX era Resident Evil titles like RE2 have huge machine gun magazine capacities which are shown in percentage values: 100% for a full clip which contains a couple hundred rounds. Very few spare magazines can be found in these games.

It is first chronologically seen in Resident Evil 0 as an unlockable item. It is obtained by completing the Leech Hunter minigame after collecting 1-29 leeches.

Resident Evil: Operation Raccoon City however, does not feature its own machine gun ammo but instead uses ammo stashes found throughout the game to replenish ammo.

In the Resident Evil Outbreak series, the Submachine gun uses the same 9mm ammunition of handguns, instead of custom SMG ammo. 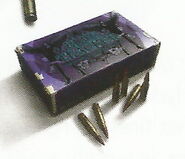 RE7
Add a photo to this gallery
Retrieved from "https://residentevil.fandom.com/wiki/Machine_gun_ammunition?oldid=696367"
Community content is available under CC-BY-SA unless otherwise noted.