The Magnum (マグナム, magunamu?) is a powerful weapon found in Resident Evil 2. It sports the logo of the Raccoon Police Department, identifying it as being in official police service to some capacity. A fictionalised version of the Desert Eagle, it carries eight .50AE cartridges unlike the real weapon's seven.

While it is a powerful weapon, the Magnum holds only eight Magnum Bullets and spare ammunition is somewhat scarce, and so it is preferred to only be used against more powerful enemies such as bosses. 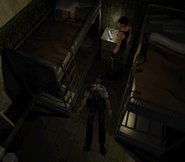 its location in Leon A

its location in Leon B

Japanese item description 02
Add a photo to this gallery

Tokyo Marui, a Japanese Airsoft gun company, has manufactured three limited edition airsoft models of Leon's Desert Eagle. The first Airsoft gun made is the standard Resident Evil 2 Magnum. The second model that followed is the C. Magnum. The most recently produced model is the City of the Dead version (referred to as the "Leon Custom"). All versions have the name "Leon" carved on the grips.

Retrieved from "https://residentevil.fandom.com/wiki/Magnum_(RE2)?oldid=690955"
Community content is available under CC-BY-SA unless otherwise noted.