The Magnum Python is found in Resident Evil: Revelations. The Python is one of the most powerful firearms in the main game.

In Raid mode, the Python is usually a very powerful weapon with all of its other base stats very low. All of the weapon's stats, in the campaign and Raid mode, can be upgraded with their respective parts. Note that certain characters (most notably Rachael Foley) can reload the magnum quicker than others.

The Colt Python also appears in the ff. games: 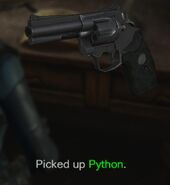 Python location for Keith
Add a photo to this gallery

Retrieved from "https://residentevil.fandom.com/wiki/Magnum_Python?oldid=412790"
Community content is available under CC-BY-SA unless otherwise noted.