Male Passenger was a colleague of WilPharma's R&D chief, Dr. Frederic Downing. In November 2005 he was deliberately infected with a strain of t-Virus while flying on Flight N538-GA bound for Harvardville Airport. The Male Passenger soon mutated into a Zombie and began infecting the other passengers and crew, causing the plane to crash-land into an airport terminal, resulting in the Harvardville Incident. 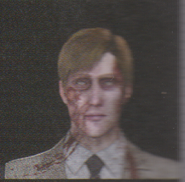 Retrieved from "https://residentevil.fandom.com/wiki/Male_Passenger?oldid=873767"
Community content is available under CC-BY-SA unless otherwise noted.