The Man-eating insects were the result of hybridizing various insect species brought upon by Marguerite Baker through experimentation with the Mold. Responsible for their creation, Marguerite would often refer to them as her "babies".

The Man-eating insects have similar anatomy to crane flies and mosquitoes while also displaying traits of black flies and wasps; All of which being extremely common insect species to the swampland's of Louisiana. They have mutated to abnormally large sizes far beyond capable of any ordinary insect.

Young Man-eating insects behave closely to black flies and wasps, living in nests and swarming a target to attack. Adults appear less dependent of each other, straying away from the swarm behaviors seen in younger forms. To attack, they sport large stingers as well as biting with newly developed wasp-like mandibles when provoked.

They were controlled and presumably infected by Marguerite Baker, even having a symbiotic relationship with her, as she had the ability to summon them in swarms to attack. Marguerite was also capable of birthing them and creating a nest through her own nest type mold mutation that enveloped on her stomach and groin area in her mutated state.

Man-eating insects (adult) are encountered in Resident Evil 7: Biohazard. They appear mostly in the Old House before Marguerite Baker is defeated. They are mostly passive and take a long time to react to the player's presence and to attack. They do very little damage and usually die from any amount of damage. The best way to dispatch them is to wait for them to stay still in the air. This signifies that they are about to attack, but you can hit them before they can start their attack. 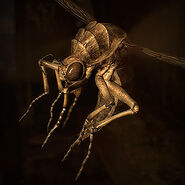 Death counter image on residentevil.net
Add a photo to this gallery

Retrieved from "https://residentevil.fandom.com/wiki/Man-eating_insect_(adult)?oldid=740994"
Community content is available under CC-BY-SA unless otherwise noted.