Start a Wiki
watch 02:17
The Loop (Games)
Do you like this video?
For the rejected Resident Evil 0 enemy, see Spider man.
BIOHAZARD 1.5
(Rejected BIOHAZARD/Resident Evil sequel)

Man spider was an enemy which appeared in BIOHAZARD 1.5, a rejected game intended to be the sequel to Resident Evil. The creature was to appear in NEST, having escaped containment thanks to an act of sabotage.

One of the 1.5 trailers features the infected William Birkin fighting a Man spider, demonstrating the game's choreographed cutscenes.

The creature's model and animations were finished but the creature failed to survive the game's scrapping, being absent entirely from Resident Evil 2, replaced by the Licker.

Elza fighting against the Man spider. 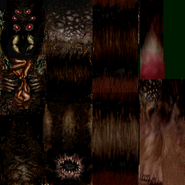 Concept art of Man spider
Add a photo to this gallery

Retrieved from "https://residentevil.fandom.com/wiki/Man_spider?oldid=807133"
Community content is available under CC-BY-SA unless otherwise noted.