Marco Rose was a member of the BSAA North American branch and led Bravo Team in the Lanshiang mission in June 2013. Marco felt strongly about the terrorists using the name "Neo-Umbrella" and expressed a strong desire to capture "Ada" and make her beg for forgiveness in front of the entire world.

During the course of the mission, Marco fought alongside Alpha Team led by Captain Chris Redfield, but was separated while searching for Iluzija. Marco contacted Chris and told him that he could not find another team member named Jeff and yelled, "Oh shit, I think that thing was here!" Marco was the only survivor of the attack from the Iluzija excluding Chris and Piers. This victory was short lived however as the trio are ambushed by Carla Radames. Marco was injected with the C-Virus via a syringe dart from Carla's gun and almost immediately entered the Chrysalid state. Shortly after, he emerged as a Gnezdo. After his death, Chris took the remnants of Marco's C4 explosives from the pieces of the Chrysalid and became determined to hunt down and kill Carla.[1]

Marco's father was in Tall Oaks at the time of the bioterror attack. Hiding out at the cathedral, he bragged that Marco would come and rescue him at any minute.[2]

A close-up of Marco 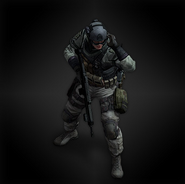 Retrieved from "https://residentevil.fandom.com/wiki/Marco_Rose?oldid=793596"
Community content is available under CC-BY-SA unless otherwise noted.