Up to 2 players simultaneously

Marvel vs. Capcom 2: New Age of Heroes, is a 2000 2D Capcom fighting game, in which Jill Valentine appears as a playable character. The game has been re-released on the Xbox Live Arcade and PlayStation Network.

Two years after the battle against Onslaught, peace in the planet Earth was restored until a mysterious entity named Abyss, shrouded the atmosphere with his dark energy. It was consumed within a sphere that the being was holding close to him; with his immense strength, it blew passed a desert and the plant life was also ruined. A pirate known as Ruby Heart discovered the energy and warned the heroes and villains from the two camps who were fighting amongst themselves. Together, they must stop this new nemesis before the Earth and the universe is destroyed by Abyss' terrible power. In the end of the battle, the heroes and villains make a truce while taking a joy cruise on Ruby Heart's ship flying through the skies of the Earth; she holds the orb in her hand then casts it into the sea thus seeing the last of Abyss and closing the rivalry between Marvel and Capcom.

Jill is one of the game's few Capcom characters that aren't from fighting games. Jill wears her costume from the original Resident Evil and is voiced by her Resident Evil 3 voice actress, Catherine Disher. She can use a number of weapons and enemies from Resident Evil. Jill can attack with: 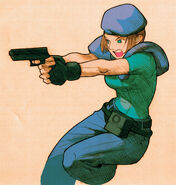 Jill's Marvel Vs Capcom 2 Vs Pose

Victory
Add a photo to this gallery

Spin Kick
Add a photo to this gallery

Slide
Add a photo to this gallery

Dash
Add a photo to this gallery
Retrieved from "https://residentevil.fandom.com/wiki/Marvel_vs._Capcom_2:_New_Age_of_Heroes?oldid=812528"
Community content is available under CC-BY-SA unless otherwise noted.