Merah Biji was a member of the Bioterrorism Security Assessment Alliance (BSAA). Formerly a lab technician for the BSAA's Far East branch, she transferred to the Special Operations Unit, earning the admiration of North American SOUs Chris Redfield and Piers Nivans, who she would work alongside of in their investigation of the C-Virus at Marhawa School.

Biji lost her parents to the 1998 Raccoon City Destruction Incident, having been caught up in the outbreak while on a business trip.[2] Her hatred of bio-weapons led her to joining the BSAA's Far East Branch as a researcher. By around 2009, Merah requested to join the branch's Special Operations Unit. Over her year of training, she met BSAA advisor Doug Wright and Piers Nivans, by which she had become skilled and legendary enough in her own right to spar.[3]

In 2012 she teams up with BSAA North American Branch operatives Chris Redfield and Piers Nivans, to exterminate a group of B.O.W.s in an unspecified place. Later, the agents prepared to contact Prof. Wright.

When Merah tried to contact Doug she was told that he was on a leave. She begins to worry when Doug is still unreachable even at the end of his leave. They decide to go to Bennett University to find out that he moved to the Marhawa School with his nephew Ricky Tozawa.

When they arrived at Marhawa School, they found the school in a pandemic state and everyone looks for survivors in the school. Chris was the only one to succeed by finding Ricky who briefs them on the situation. Merah was tasked by Chris to find the perpetrator of the incident: Bindi Bergara. Later Chris informed Merah that Doug is dead.

She then proceeds to the cathedral where she finds Bindi whom slaughters the rest of the school survivors. She engages the fight by shooting her in the head and slits her throat, thinking that she killed her. She is quickly disillusioned when Bindi stands back up again. She then ignores Chris's order to retreat and disables her radio. She empties her gun on Bindi, realizing that it's useless as Bindi's body regenerates, but she also notices that more she hurts her, the time her body takes to recover. Then she takes her knife and frenetically slices Bindi until her body wraps in a Chrysalid.

Thinking the fight was over, Merah turns away, but the chrysalis hatches and unleashes a gigantic monster. Merah tries to fight back but was no match alone against Bindi's new form. Fortunately Piers appears, ramming Bindi with the Hummer and crushing her against a wall. After Piers neutralizes Bindi one more time by blowing a satchel in the Hummer and by making an additional hole in Bindi's head. Then they  make their way to the underground complex to meet Chris and Ricky despite having many zombies on their way.

When they finally make it to the underground and reunite with the rest of the team, Bindi, still alive, bursts into the room. When she finds Nanan's remains she becomes infuriated and Merah and her friends know that they have no other choice but to run away.

They manage to reach the helicopter, but when they engage the hangar lift Bindi bursts into the room and climbs on the elevator, and they understand that the fight was inevitable. After a fierce fight, Bindi was finally annihilated by concentrated fire, but the rest was short-lived, as Nanan, still alive, tries to stab Piers with her tentacles, but Merah rams Piers out the way and gets stabbed. After Piers obliterates Nanan, Merah's last words were to ask Chris about a world without bioterrorism and to Piers to ask him to take care and watch over Chris, then she dies from her injuries. 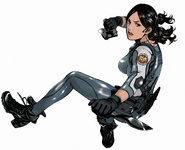 Merah as she appears on the back cover of Vol. 1

Merah as she appears on the back cover of Vol. 3 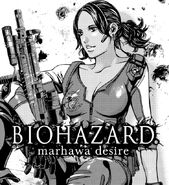 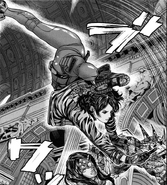 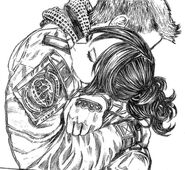 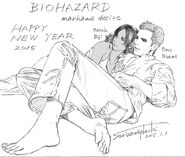 Drawing of Piers and Merah by Naoki Serizawa, the artist for Resident Evil: The Marhawa Desire and BIOHAZARD heavenly island. 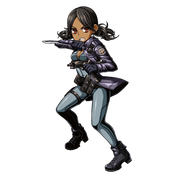 Merah in Clan Master.
Add a photo to this gallery

Retrieved from "https://residentevil.fandom.com/wiki/Merah_Biji?oldid=793070"
Community content is available under CC-BY-SA unless otherwise noted.