The Weapons Merchant (, buki shōnin?) is a mysterious Ganado character that appears in Resident Evil 4 as a means for the player to upgrade, sell, and purchase weapons.

While the Merchant primarily functions as a shop for players, he still "acts" as a character.

He is a weapons peddler who dresses in a long, black coat. A pale blue flame marks the locations of his shops, and he appears capable of traveling great distances in the blink of an eye. He carries a wide selection of weapons inside his huge backpack and coat. It is obvious from his appearance that he is a Ganado, but he doesn't seem to regard outsiders as a threat, and will deal with anyone as long as the price is right. No one knows how he gets his weapons, but his selection is enough to impress even Leon. He's very good at his trade, flattering the buyer with phrases like “The choice of an avid gun collector!” and “You'll need guts to buy that weapon!”[1]

The Merchant reveals himself to Leon Kennedy after he wakes up in the house in the Valley by beckoning him from outside a window. When Leon goes around the outside of the building, the Merchant shows off his merchandise. Ada later runs into him inside the Cave, before he properly sets up his shop (which includes lighting a torch that emits blue fire). Leon crosses him in this same area when he is ready, and he greets Leon. He is also encountered by Ada Wong on various occasions. He was last seen before Leon fights Saddler.

The Merchant is interacted with by walking up to him and pressing the button that corresponds with the "TALK" action, the only exception being the first two times Leon encounters him and players "visit" him at the start of a new round.

The Merchant will appear at various points throughout the main game and Separate Ways, offering new upgrades and merchandise the further the player progresses.

The Merchant usually sets up a blue torch near him when he is in business, and most of the areas in which he appears are free of enemies, though they are not safe-zones.

The player can actually kill the Merchant. His body will not fade, and he will respawn in that specific spot after some time in Amateur and Normal difficulties, but not in Professional, where he will never come back.

The Merchant also runs the various Shooting Ranges around the castle and island areas.

The Merchant also has a bottle cap modeled after him. He is one of the regular prizes that can be won when playing Game C and his voice clip is him saying "Welcome!".

Players can shop by using pesetas they find, or obtain in exchange for selling items or treasures.

For the list of buying and selling prices, see here. When upgrading weapon Capacity, the held ammo resets to full.

There is a minor side quest involving destroying Blue Medallions for the Merchant at the beginning of the main game, which the player can start before even meeting him. Doing so will reward Leon with a specialized handgun.

Merchant "bottle cap" in RE4

close-up of the Merchant's inventory

The Merchant open for business 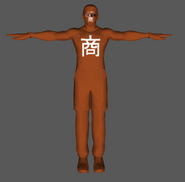 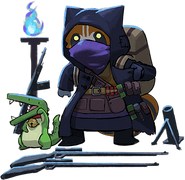 Merchant referenced in a spray from Resident Evil: Resistance 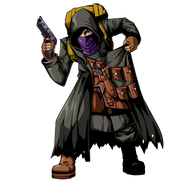 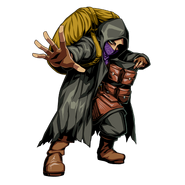