The Merchant (商, Shō?) was a planned game mechanic in Resident Evil 5. Copying the Weapons Merchant from Resident Evil 4, the game was to have the player purchase supplies from a non-canon character who appears in various places in the game. According to the official art book of Resident Evil 5, players were at one point to be able to steal from him too, an idea dropped early on. Ultimately the entire mechanic was removed from the game in favour of the Item Management screen. 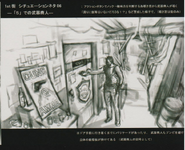 Concept art of the merchant's hideout