watch 01:51
Who is Mia Winters?
Do you like this video?
Prime universe
(Capcom's primary storyline)

Mia Winters (ミア・ウィンターズ, Mia Wintāzu?) is a former operative for The Connections who worked covertly in the birth of Eveline, acting as her "caretaker" for her while covering up her career as a nanny profession to her husband, Ethan. After being presumed dead in 2014, she was recovered by the Baker family, and resided under lock and key at their property until being re-discovered in mid-2017.

In 2010, Mia became a researcher for The Connections, an international criminal organization specializing in producing bio-weapons for the black market, and in 2011, she married Ethan Winters.[3] The couple resided in Texas.[4]

A few years after her marriage to Ethan, Mia took on the job of a handler for the first successful E-Type bioweapon known simply as Eveline. Alongside her colleague Alan Droney, she was tasked with transporting Eveline on the cargo ship Annabelle to a facility in Central America. During the voyage, Mia sent a heart-warming video message to her husband Ethan saying that she misses him and that she cannot wait to be finished with her "babysitting" job.

However, when a hurricane began to hit the ship, Eveline started to become unstable, attacking Alan and infecting the crew members who would then be turned into Molded. Arming herself with a sub machine gun, Mia was to track down and pursue her throughout the ship, realising that Eveline had bonded with her and thought of her as her mother. After briefly reuniting with Alan, Mia witnessed his horrific death via Eveline's mold before she herself was infected by it. Realising her impending doom, Mia desperately tried to send Ethan a second video message, urging him to forget their relationship and wishing him a good life. She is soon after thrown from the ship into the waters as the tanker continues to be destroyed.

When the tanker washed up in the bayou of Dulvey, Louisiana, Jack Baker discovered Mia amongst the wreckage and brought her back to the Baker estate, housing her in his daughter Zoe's trailer. During this time, Mia wrote a letter thanking the Baker family for their kindness as well as warning them not to approach Eveline along with the consequences of doing so. Before she could finish the letter, she fell unconscious and, unbeknownst to her, Jack had already found Eveline and brought her into the mansion, leading to their infection and subsequent madness.

Due to Mia's infection aboard the tanker, Eveline was now able to influence and control her actions. This led her to thwart the escape plans of two of the captured Sewer Gators crew in the kitchen of the Baker guest house, stabbing Peter Walken in the back and stabbing Clancy Jarvis' left thigh. Pete managed to retaliate against Mia, but she quickly overpowered him and dragged him into the darkness, decapitating him and throwing his severed head into the view of Clancy. After a brief moment of silence, Mia approached Clancy from behind before she popped out in front of him from above to menace him.

Mia, under the influence of Eveline, sent a brief and cryptic email to her husband Ethan, only telling him to find her at the Baker farm in Dulvey, Louisiana. When he arrived, he found Mia unconscious and locked in a cell below the Baker guest house - upon waking, she was shocked to see Ethan and doubted her involvement in his arrival. In a panic, Mia guided Ethan through the basement - however, the couple reached a dead end, much to Mia's distress. While Mia rested on a nearby couch, Ethan tried to look for another way out, leading her to be captured by an unknown assailant who bashed through a hidden door in the wall.

After Ethan followed through the door and investigated the ground floor area, he was attracted back to the basement by a persistent knocking, only to be greeted by a monstrous version of Mia climbing up the stairs. She grabs and throws Ethan with tremendous strength back up the stairs and against the wall, attacking him with a knife. After a brief struggle between the two, Ethan disarmed Mia and she briefly returned to her normal self, alluding to him that Eveline would not get out of her head as she bashed it repeatedly against the wall before knocking herself unconscious. However, she quickly rose back up and grabbed Ethan, throwing him through a wall and grabbing a sharp piece of wood to fight once again. Ethan was able to defend himself with an axe, and after a short duel he struck the weapon into her neck causing her to lapse back to her normal self and collapse in her apparent death.

While Ethan was distracted by a mysterious phone call, she managed to rise once again and flee further into the house, wandering around ominously and eventually jumping Ethan after he had returned power to the attic stairs. First appearing normal and apologetic to Ethan's previous attack, she quickly turned and pinned him to the wall by stabbing a screwdriver through his left hand. As Ethan desperately struggled to get the screwdriver out, Mia obtained a chainsaw with the intention to butcher Ethan, but at the last moment Ethan freed himself and raised his left arm in defense as Mia sawed it off. As Mia continued to fight for control over her body, she wandered upstairs with Ethan in pursuit. The pair went head to head in a fight in the attic but Ethan prevailed and Mia fell to the floor, muttering "I love you" to him. Once Jack apprehended Ethan, the couple were both taken into the main Baker estate.

At some point between their capture and Ethan's escape, Mia recorded a videotape for him to watch. In it, she tried to explain that the monster is not her true self while she ran away from Marguerite, entering the Old House while coming across several key items and a puzzle that Ethan would later need to solve. However, she is soon cornered in a small crawlspace by Marguerite and recaptured.

Once Ethan entered the Old House and obtained the Stone Statuette he required to solve the house's shadow puzzle, Mia briefly reunited with him on the other side of a chainlink fence. As Ethan demanded answers from her, she was grabbed and dragged off by Lucas Baker. She would later be found hand-tied to the wall of the Boathouse alongside Zoe Baker as Ethan made his way through Lucas' death trap. Ethan eventually reached them and freed them both, giving Zoe the necessary ingredients required to craft two serums that could cure both herself and Mia. However, a heavily mutated Jack separated Ethan from the girls, and eventually left Ethan no choice but to use one of the serums on Jack in order to defeat him, forcing Ethan to use the other serum on Mia. They both pleaded with Zoe to join them in their escape, but she angrily refuses and orders them to leave, believing herself doomed.

The couple rode into the swamp on a boat, but as they came across the old wreckage of the tanker, the Mold grew over and flipped the boat, causing both to be submerged underwater. Mia soon regains consciousness outside the wreckage and desperately hunts for Ethan, who is quickly captured by Eveline and taken deeper into the wreckage. As Mia made her way through the ship, she regained her memories of Eveline and her origin through a videotape which relived the fall of the tanker, giving her more determination to free Ethan. Mia discovered where Ethan was being held through a security camera system on the bridge and

made her way down to him, freeing him. Despite Ethan's confusion, Mia quickly handed him Eveline's tissue samples in the hopes that he might be able to craft the necrotoxin necessary to kill Eveline and shut him off in a nearby corridor, urging him to leave as quickly as possible before Eveline regained control of her and separated the couple using the Mold.

After Ethan left to take down Eveline, Mia was rescued by Blue Umbrella agents. She happily reunited with her husband after he successfully killed Eveline and the pair were escorted from the area via helicopter.

Mia has long black hair with brown eyes and has a very healthy skin-complexion. When initially escorting Eveline, Mia wore a dark blue jacket with long sleeves, but after she is captured by the Bakers she sports a gray tank-top with blue jeans and white sneakers. When under Eveline's influence, her skin and pigment change into a more moldy and dirty tone. Her lips and eyes have been darkened with her pupils being a little white in the eyes.

The first hostile encounter with Mia occurs shortly after Ethan rescues her from the basement where she attacks him with a knife. The player can follow the onscreen prompts to struggle against her, but she will damage the player either way. Once Mia falls unconscious for the first time, the player has a chance to recover before she rises again and throws them through a wall into a room containing an axe which can be used to fight her conventionally. This battle serves as a tutorial for melee combat and blocking attacks. After several strikes, Ethan strikes her through the neck and she collapses, defeating her.

After restoring power to the attic, Mia attacks Ethan in another scripted event which culminates in her severing off his left hand with a Chainsaw. Shortly afterwards, she ambushes him in the attic and serves as the first boss fight. She will slowly approach Ethan and violently swipe at him with the chainsaw, inflicting a large amount of damage. She can also charge towards the player, which they can then block in order to prevent her attack from landing. Shooting her in the head with 10-15 direct shots (depending on the difficulty) will briefly make her stagger and knock her out. If the player runs out of ammo, they can still inflict damage with the axe, although this is a risky strategy. The player will know when she has been defeated when starts to collapse and says "I love you" to Ethan before Jack knocks him out.

The final encounter with Mia only occurs if Ethan chooses to cure Zoe. After rescuing him from on the ship, Mia will fully succumb to Eveline's influence instead of pushing Ethan out of the room, and will attempt to kill him with a knife. The player is required to grab the nearby crowbar to defeat Mia, and after several melee strikes Ethan impales her with the crowbar, finally ending her life.

Regardless of whether she was cured or not, the infected Mia makes a final appearance during the return to the guest house as a violent hallucination. Although she will attack Ethan with the chainsaw, she inflicts no damage. 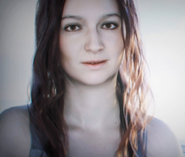 Mia, with a tagline from Tape 3 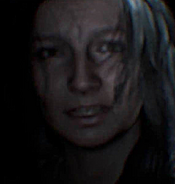 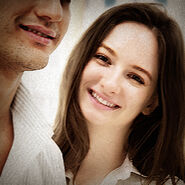 An icon of Mia from RE.net 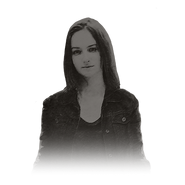 Mia after falling off the Ship 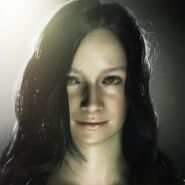 Mia's appearance in the Title screen for Jack's 55th birthday. 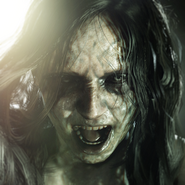 Retrieved from "https://residentevil.fandom.com/wiki/Mia_Winters?oldid=861082"
Community content is available under CC-BY-SA unless otherwise noted.