A Day in Raccoon Motel owner

Mickey was the owner of the "A Day in Raccoon", a motel located outside Raccoon City. He had a very hostile personality, even towards his motel guests.

A group of survivors took refuge at his motel during the Raccoon City Destruction Incident. During their time there, Mickey was attacked by a t-Virus-infected creature and his belly torn open. The attacker(s) did not kill him, and he transformed into a zombie.

Mickey's character skin can only be accessed through cheat devices such as GameSharks. He's a Jim-type character and starts with a Hemostat in his inventory.

Mickey has the following Stats:

In screenshot 3, Mickey tells David to "Stay here" (ここにいろ) before he heads out the door. 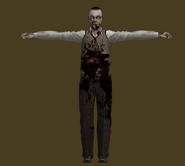 Mickey as a zombie
Add a photo to this gallery

Retrieved from "https://residentevil.fandom.com/wiki/Mickey?oldid=695308"
Community content is available under CC-BY-SA unless otherwise noted.