Mike was a U.S. Armed Forces Helicopter pilot who assisted Leon late into the "Los Iluminados incident". He was called out to retrieve Leon and Ashley Graham after the first Helicopter was shot down.

Leon initiated radio communication with Mike, who was flying a modified Bell UH-1 Gunship armed with Chain Guns and Hellfire missiles, which he used to destroy large towers, themselves armed with Gatling guns. Shortly after destroying a heavily guarded base with the chopper's Chain Gun, he saved Leon again; this time from a weapon and numerically superior group of Militia Ganados.

Leon tells Mike he owes him a drink; Mike comically responds that he "know[s] a good bar". However, Osmund Saddler appears at a higher cliff edge, accompanied by a heat-seeking Rocket Launcher-armed Ganado. Mike does not see the Ganado, and it fires a rocket at Mike's helicopter, which sends it crashing to the bottom of a gorge. Mike's face is never seen in the game.

Ada Wong later encounters the Ganado who killed Mike and guns him down.

Mike will fly above the player throughout the outdoor segment in chapter 5-4 and will assist Leon by firing at Ganados and destroying important Ganado structures. In Professional difficulty, Mike will help far less and take more time between destroying structures. Mike actually will get angry at Leon if the player fires at him. Mike will say "What are you crazy?". If the player is too close to a structure Mike is trying to destroy, Mike will say "Hey, get out of the way!" repeatedly to warn the player he's firing. However, eventually he'll fire anyway and the explosion can damage Leon if he's too close.

Mike's helicopter after being blown up. 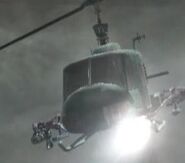 Although not visible in the cutscene, third-party modding tools have revealed that Mike has his own model inside the helicopter cockpit.[1]

Retrieved from "https://residentevil.fandom.com/wiki/Mike?oldid=811480"
Community content is available under CC-BY-SA unless otherwise noted.