Captain Mikhail Viktor (ミハイル・ヴィクトール, Mihairu Vikutōru?, Russian: Михаил Виктор) was a member of the Umbrella Biohazard Countermeasure Service (U.B.C.S.), who accompanied Carlos Oliveira and Nikolai Zinoviev to Raccoon City in 1998 to deal with the t-virus outbreak.

Originally from Leningrad, in the Russian SFSR, Mikhail became a soldier in the Soviet Army, where he reached the rank of Captain. He was forced to resign after the Soviet Union's collapse and the army split among regional borders.

In the aftermath of the breakup, Mikhail joined a guerrilla organization aimed at achieving independence for an ethnic minority who was facing persecution from the new Russian Federation, his wife being of this community. As the guerrilla organization transformed into a mere terrorist group, Mikhail was found and arrested by Russian government forces. The Umbrella Corporation learned of his fine leadership qualities and military background, and offered his men amnesty if he joined the company's paramilitary force.[1][2][excerpt 1][3][excerpt 2] Like former Soviet Army Colonel Sergei Vladimir, Mikhail was allowed to keep his military rank within the U.B.C.S..

During the 1998 biohazardous outbreak in Raccoon City, Captain Mikhail was sent into the city on September 26 along with the rest of Delta Platoon. Unlike Nikolai, Mikhail was not aware of the U.B.C.S.' true objective and assumed it to be the same as Carlos' opinion - the evacuation of civilians.

Over the next few days, the UBCS would suffer heavy losses due to the unexpected superiority of the zombies of unmanageable numbers. Capt. Mikhail, Sgt. Zinoviev, and Cpl. Oliveira managed to escape the zombie horde and garrison themselves in an abandoned tram car. Mikhail, wounded, would be left in the tram to recover while the other two began searching for a means of escape with the use of the tram.

In the English-localization of Resident Evil 3: Nemesis, Mikhail is instead given the rank of Lieutenant. This change in rank was due to a mistranslation of the Kanji word Taii (大尉?), which can translate as either an Army Captain or Navy Lieutenant.

His injuries did not leave him a burden, however, as at one point he got out to fend off an approaching horde of zombies despite his aforementioned injuries. After being scolded at by Jill Valentine for taking unnecessary risks, he retorted that none of the events in Raccoon City were caused by the U.B.C.S., and expressed survivor's guilt. As platoon leader, he felt remorse for not being able to save his men, and for not being able to fight alongside the others due to his injuries.

After Jill and Carlos eventually recovered the right components necessary to get the trolley car moving again, the three of them (minus Nikolai, who was presumed deceased) rode to the St. Michael Clock Tower.

Before arriving, the cable car was attacked by the Nemesis-T Type, who managed to enter the rear car. Jill went back into the car to investigate a strange noise and spotted the B.O.W.. Mikhail, still seriously wounded, demanded that she leave the car as he continued to shoot the Nemesis with his M4 Carbine.

After running out of ammunition and being brutally beaten down by the Nemesis, Mikhail took a grenade from his vest and pulled the pin in a sacrificial attempt to kill the Nemesis and save Jill and Carlos.[4]

Despite his effort, the Nemesis survived the explosion and continued hunting Jill. However, his sacrifice was not entirely in vain, as the explosion jettisoned Nemesis from the car, leaving Jill safe for the moment.

Mikhail makes one last appearance in the extra Mercenaries mini-game after beating the game as a playable character.

Mikhail shooting a horde of zombies

"You lose". Mikhail before he's dead 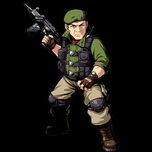 Mikhail in RE3 Remake
Add a photo to this gallery

Retrieved from "https://residentevil.fandom.com/wiki/Mikhail_Viktor?oldid=798386"
Community content is available under CC-BY-SA unless otherwise noted.