Leader of the Four Houses
Ruler of the Village
Biologist

Miranda (ミランダ, miranda?) was a scientist who largely served as a neopagan priestess and the spiritual and temporal leader of a mountainous village in Eastern Europe.[1] She is known to her followers by the title "Mother".

Despondent over losing her daughter Eva to the Spanish flu, her accidental discovery of the mutamycete mold led to several experiments on herself and her fellow villagers in hopes of finding a suitable host to revive Eva. She became a religious figure at the village she resides in and offered protection, but she was secretly using her influence to use helpless villagers as test subjects or subjects of torture for over a century due to the Mold's effect on her lifespan.

She was also once a mentor of Umbrella Corporation founder Oswell E. Spencer and inspired him to achieve his vision of human evolution, making Miranda the indirect instigator of all the major events that occur in the entire series. She was also the head researcher responsible for the creation of Eveline.

Miranda was born in the late 19th century in a mountainous region of Eastern Europe. She became a mother to Eva in June 1909, but lost her in August 1919 when the Spanish flu passed through the village.[2]

Discovery of the Mold and the Four Houses

While grieving her daughter's death, Miranda wandered by the Mountain Stream to a cave north of the village, where she intended to kill herself and rejoin her daughter. In the cave she discovered the fungal superorganism she would later dub the Megamycete.[2] After coming in contact with the Megamycete, she was immediately infected and, while mutating, gained the memories of long dead people who had also been in contact with the organism.[2] Her intellect increased, Miranda soon began using the Megamycete and its Mold for her own experiments. She experimented on hundreds of others with the Cadou parasite, which created based on the Mold in the hopes of finding Eva a perfect vessel, though most of them turned into Lycans. Eventually she came across four individuals who were able to successfully bond with the parasite, they would come to be Alcina Dimitrescu, Donna Beneviento, Salvatore Moreau and Karl Heisenberg. The result of each experiment would have different results, but none were fit to be Eva's vessel.

The mutation from the Megamycete also caused Miranda to become ageless and practically immortal as she never aged for many decades.

At some point, she took in Oswell E. Spencer as her student prior the creation of Umbrella Corporation. After a fierce disagreement between her and Spencer about the nature and purpose of BOW research, Spencer left her, although he used the symbol of the 4 houses as the logo for his company.

Many years later, she was approached by the crime syndicate The Connections, who offered to help her. She gave them the mold and her child's DNA, she also participates in the creation of the first E Series Eveline with her as the head of the project and aboard the ship Annabelle. Miranda manages to escape by unknown means before it's destruction. This event made Miranda to realize that Eveline was a defected creation.

Miranda's involvement with The Connections and their creation of Eveline led to her being hunted by BSAA for the next three years.

Three years after Eveline and her involvement with the Dulvey incident, The Connections informed Miranda of the existence of Rosemary Winters, the child of the surviving couple Ethan Winters and Mia Winters. She begins to set out in stealing her, in her eyes finally found Eva's perfect vessel.

Miranda then kidnaps Mia at an unspecified time, subjugating her to a multitude of her experiments to aid her research. She in turn took on Mia's appearance so not to alert Ethan to his wife's disappearance. Despite being unaware of Ethan and Mia's personal history Miranda is able to play at the role of wife and mother leaving him none the wiser. After Ethan puts Rose to sleep, the two converse for a bit leading to Ethan again wishing to bring up the Dulvey incident. With no such personal experience of the event herself Miranda attempts to steer the conversation elsewhere or end it all together.

Suddenly Miranda, in her guise as Mia, is shot in the shoulder, and soon followed by a barrage of bullets flying through the Winter's house hitting her several times. Following this Chris Redfield appears shooting her several more times in the head, allowing her to feign death. Soon after Miranda would engage with the departing convoy killing them and taking Rose back to the Village as her prize.

Miranda, then in the guise of the old Hag, encounters Ethan once more soon after his confrontation with the Lycans. Soon after Miranda makes quick work of one of the villagers, finally giving Ethan a first glimpse of the real her, unbeknownst to him of their previous encounters thus far.

Upon being brought in by Heisenberg, Miranda sits in judgement of Ethan's fate ultimately deciding to side with Heisenberg suggestion for entertainment over Alcina's own request. Following an argument from the two siblings Miranda makes it clear her decision is final demanding the two know their place as well.

Later, Alcina informs Miranda of Ethan's escape through Heisenberg's show. Miranda then informs Alcina of her plans for Ethan as well as his importance to her goal, much to the disdain of Alcina who wishes for revenge for the slaying of Bela Dimitrescu, perpetrated by the man himself.

After Alcina's own demise Miranda once more takes on the form of the Hag form to interact with Ethan. She tells Ethan the key to finding Rose lies in gathering the 4 House Leader Crests.

During Ethan's time with Heisenberg, she gathers the four flasks that he had previously collected, needed them in the ceremony to bring Eva back.

After Heisenberg dies at the hands of Ethan, Miranda distracts him with the cries of Rose the shifting into Mia, telling him of Rose's importance to her. It is at this moment she informs Ethan that Rose is the successor to Eveline and that her daughter shall be reborn through Rose.

Miranda then seemingly dispatches of Ethan Winters, his usefulness to her reaching its end and takes off to bring Eva back once and for all.

Following the attempted reincarnation of Eva, Miranda is once more brought face to face against Ethan. While being distracted by the mysterious reappearance of the man she kill Miranda takes gunfire from afar momentarily losing Rose considering with the revelations her power is waning as well. In a last ditch effort to free herself of Ethan Winters and carry on with her final plans, Miranda takes full control over the Megamycete taking on her monstrous form once more proclaiming ownership over Rose. During the fight, she thanked Ethan for killing her failed children and awakening the Megamycete, assuring him that she will give Rose a happy future and that he should die peacefully and permanently.

After an intense and ferocious battle, Ethan seemingly defeats Miranda, who shouts for Eva during her last moments. She begins to calcify and crumbles to the ground. In a last ditch effort, she fully integrates herself with the Megamycete itself and proceeds to pursue Ethan, Chris and Rose. Her final demise comes as the Megamycete and herself go up in flames as Ethan stays behind to detonate Chris's explosive ending them both once and for all. 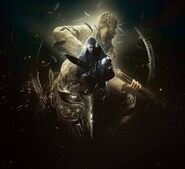 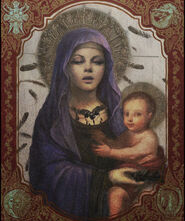 Close up on Mother Miranda.

A picture of Mother Miranda found in the Castle Dimitrescu. 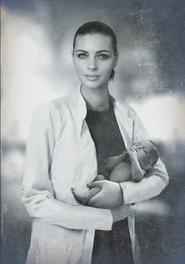 Miranda and Connection scientists conducted examination on Eveline.
Add a photo to this gallery

Retrieved from "https://residentevil.fandom.com/wiki/Miranda?oldid=887258"
Community content is available under CC-BY-SA unless otherwise noted.