As the battle between Wesker and Jill begins, the player can explore around the area where they can find items. Once done, run to the door on the east side of the area and examine it where the prompt appears. After a brief cutscene, run up the stairs and hide around corridor. There are treasures that can be collected around the corridor. There's also a sarcophagus which require an assist of a partner to open, inside containing; L.Hawk, Emerald (Oval) and Sapphire (Brilliant).[1]

Once the player have picked up everything they need, lure Wesker to the rooms in the northwest corner of the map, then run out of his sight. Whenever Wesker says: "You can't hide forever" or "Just accept you fate", this indicates that he has lost track of player. Find a cover point close to Wesker position, snap against a nearby wall, then jump out and shoot him with the best weapon available. After these, sprint away as soon as possible before Wesker can warp to your position and perform a rush attack. Though it is possible to contextual counter his attacks by pressing the necessary button prompts. Once player done enough damage to Wesker, this will cause him to curtail the meeting before the seven-minute deadline.[2] As an added bonus, you can collect a unique treasure during the fight with Jill. 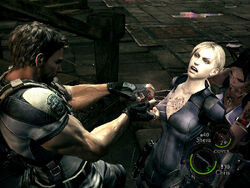 As Wesker leave the area, the confrontation against Jill will begins. The Heart of Africa can be found between the two staircases when the battle begins, but it's only available if player inflicted sufficient damage on the early battle against Wesker.[3]

The battle will continue until player successfully removes the device from her chest.

During the event of Chapter 5-3 in Resident Evil 5, Jill was left by Chris and Sheva as the two continues their pursuit chasing after Albert Wesker. Then she temporary collapse and fainted. Later, Jill was discovered by a BSAA member Josh Stone inside the Monarch Room. Then, the two head toward the elevator and leave the area afterwards.

After gaining access to this room by way of the Monarch Room entrance, Chris and Sheva, in hopes of confronting Excella, run into two unexpected surprises. They are attacked by the cloaked woman, who turns out to be Jill, and Albert Wesker. Wesker claims that it is a fair "two on two" fight, and that he only has seven minutes to "play".

Wesker and Jill
Add a photo to this gallery

One of the murals

A "Sun" painting in the ceiling

Retrieved from "https://residentevil.fandom.com/wiki/Monarch_Room?oldid=791344"
Community content is available under CC-BY-SA unless otherwise noted.