A former researcher for Umbrella Pharmaceutical, Inc., Morpheus was used by Umbrella as one of the many scapegoats for the mansion incident which occurred in May 1998.

Bitter and resentful, Morpheus distanced himself from Umbrella, sinking into madness with the idea of revenge in mind. To this end, Morpheus stole several "t" samples from Umbrella Europe's Paris laboratory as well as the highly experimental tG-virus, intending to use the former to hold the world for ransom.

After he and a group of colleagues managed to form a functional group of soldiers, he hijacked the Umbrella-owned ocean cruiser, the Spencer Rain, from which he planned to launch t-virus warheads if his demands were not met. He was utterly obsessed with beauty and grace, his ultimate ambition being to create a beautiful and elegant world by destroying the cold and ugly world which exists today. Being a megalomaniac and highly narcissistic, Morpheus believed himself to be a portrait of perfect beauty and underwent re-constructive surgery to maintain his youthful appearance, and possibly some gender-reassignment surgeries.

Morpheus' plans hit a snag however when USSTRATCOM member Bruce McGivern managed to make his way onboard the cruiser and sabotage his plans. Morpheus managed to personally hunt down and hold McGivern at gunpoint, despite the dangers of the t-virus outbreak aboard the ship. However, due to the intervention by the Chinese special agent Fong ling, McGivern not only managed to escape, but Morpheus himself was left horribly injured.

Desperate to make both McGivern and Ling pay, Morpheus injected himself with the tG virus(created by fusing the G-virus with a t-virus anti-body), which mutated him into a new form of Tyrant. Unlike previous instances of either the tyrant or Gene viruses Morpheus managed to maintain his mind after his transformation. Morpheus' mutation kept his shape overall humanoid while still endowing himself with the strength, speed, and ability of a Tyrant.

However, after engaging Ling and McGivern on several occasions, the mutagenic effects of the Gene element that make up the tG-virus began to run rampant in Morpheus' body, similar to William Birkin's transformations. To this end, Morpheus began to succumb to the virus, losing all rationality and thought in the process as his transformations became more and more monstrous, eventually becoming a massive blob of mutated flesh. In the end, McGivern caused so much damage to Morpheus that the t+G virus' unstably mutates into a massive form of flesh growing so big that the missile launches and blows morpheus up once and for all.

In his Tyrant form, Morpheus is able to self-generate an external bio-electric field, becoming a highly successful Tyrant, unlike his predecessor the T-091, who was created through the same virus but lacked the bio-electric abilities. Like most tyrants, his right arm mutated into a claw resembling that of the T-001's. His attacks include jolting out electricity bolts, rising to the air and creating an electrical field, jumping from long distances and then spiraling in mid-air, and continuously dashing at inhuman speed.

He is invulnerable to most firearms, so the "Charged Particle Rifle" is the only weapon that can damage him. 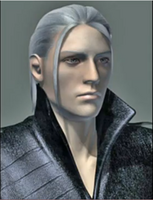 Morpheus injects himself with the tG-Virus 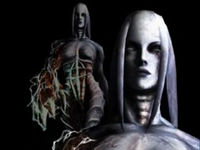 Bruce is confronted by Morpheus, who has mutated into a Tyrant

Tyrant Morpheus, before his battle with Bruce

Morhpeus, during his first encounter with Bruce

Morphues, who holds Bruce at gun point, orders him to toss his weapon away

Morpheus in his second form during gameplay

Morpheus, during the ending of Dead Aim
Add a photo to this gallery

Retrieved from "https://residentevil.fandom.com/wiki/Morpheus_D._Duvall?oldid=140144"
Community content is available under CC-BY-SA unless otherwise noted.