Accidental
Moth Parasites are the larva of certain variations of t-Virus-infected moth that bursts from a host's chest and latches onto its victim's back.[1] When its host is badly damaged, the parasite can leave their host's chest cavity and land onto a new host's back. It can survive for a while after the host is dead and can attack by grappling its prey. They are poisonous. 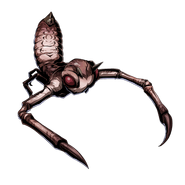 In the novel Resident Evil CODE:Veronica an un-hatched moth parasite is spat onto the back of Steve Burnside while he is running through the Antarctic base with Claire Redfield after the plane they took from Rockfort Island was manually taken control of by Alfred Ashford.