The Moving Platform is a location in Resident Evil 5, featured in Chapter 5-3. The area nearly identical to the Experimental Facility, except that the player must ride the carousel-like platform to the highest floor and contend with armed Majini.

Once player enter this area, the game will automatically saved itself. Head toward right and smash a crate where it contains a green herb. Head for the two crates on the walkway passage, each contain rifle ammunition. 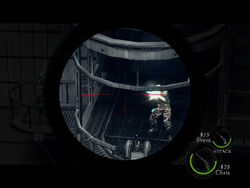 Before player set the platform in motion, head over the east side and look up. Player can see the BSAA emblem through the floor grating of the control booth above.[1]

Once player reaches the top of the chambers, take shelter behind the central column as there will be multiple armed Majini. The door at the far end leads to the Monarch Room Entrance.

Deutsch
Community content is available under CC-BY-SA unless otherwise noted.