watch 02:48
Wiki Targeted (Games)
Do you like this video?
Play Sound

"Mr. X" is a figurine manufactured by Palisades as part of their second series of Resident Evil figures.[1] It depicts "T-00", the Tyrant in Resident Evil 2.

Biological weapon designate T-00, also known as Mr. X, is the first of several biological weapons unleashed in Raccoon City to pursue and destroy any enemies of the Umbrella Corporation's work there. Delivered via helicopter, Mr. X is programmed to seek his target relentlessly until termination is recorded. Like the genetically similar "Nemesis" weapon, subject is capable of regenerating upon being damaged and will not be deterred by any obstacle until its mission is complete. If mortal damage is suffered, Mr. X has been genetically programmed with the ability to mutate into an even stronger version of the Tyrant-class weapon.
Mr. X is as deadly as it is unstoppable. Under no circumstances should this creature be approached or provoked!

"Mr.X" stands about 8 Inches in height, easily towering over many other Palisades figures (and other figures of a similar scale). The figure comes with a stand and switchable hands for more posing. The figure is highly articulated, though some aspects of the figure actually limit this articulation.

The neck joint is capable of moving up and down as well as left and right to a limited extend (due to the coat collar being solid).The shoulders feature a joint that can be moved forward, backward, up, or down allowing for quite a few poses. The arms also feature elbow joints and rotatable wrists. The waist can move left or right and the legs feature forward and backward articulation at the hips, bending  knees, and rotatable ankles.  There is also a rotatable joint for the upper legs. It should be noted that the leg joints aside from the ankles may not see much use due to the lower part of the coat somewhat restricting movement.The lower half of the coat is made out of a flexible plastic which can allow the knee and hip joints to be moved somewhat, though, poses that can be done are greatly limited.

The stand is made out of the same flexible plastic as the lower part of the coat, and is prone to warping so it may need to be bent back into shape.

A paint Master prototype of this figure is known to exist. As with all paint master prototypes it is significantly larger than the standard figure and also more fragile.  The scupt features a completely different and larger head and larger fists. The paint job is also much closer to the actual ingame version, featuring a green coat instead of a black one like the final version got.

Credit must be given to Corndog Collectibles on Ebay for these images as he is the original owner of this prototype: 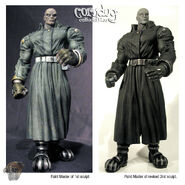 Comparison of the final figure and the paint master prototype 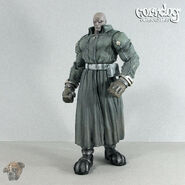 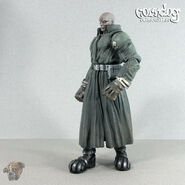 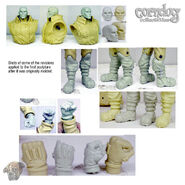 Test shot comparisons of the different part molds of the prototype and final. 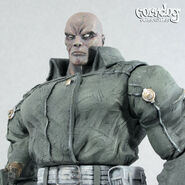 Close up of the prototype 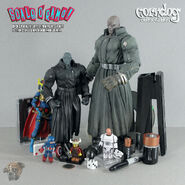 Retrieved from "https://residentevil.fandom.com/wiki/Mr._X_(Palisades)?oldid=797850"
Community content is available under CC-BY-SA unless otherwise noted.