Murphy Seeker (マーフィー・シーカ, Māfī Shīkā?) was a mercenary for the Umbrella Biohazard Countermeasure Service, serving as a sniper for Alpha Platoon and operating in Squad A.[1][2] He was a close friend of Carlos Oliveira.[2]

Formerly a United States Marine and commendable soldier, the 27-year-old Murphy was an expert marksman with an introverted personality. Shortly after Murphy returned home, completing his tour of duty in the Gulf War, his brothers were killed by a street gang. In an act of blind vengeance, Murphy utilized the skills he had learned as a Marine sharpshooter to gun down twenty gang members with a Hunting Rifle before being arrested, convicted and sentenced to life imprisonment.[1]

His actions and skills did not go unnoticed, as the Umbrella Corporation had been observing and researching individuals of talent trapped in precarious and desperate situations. Murphy was offered a position within the U.B.C.S. as a sniper, and accepted in order to have his life sentence commuted.

Carlos Oliveira found Murphy in the Umbrella Sales Office, severely wounded and infected with the t-Virus. Murphy, knowing his eventual fate, begged Carlos to shoot him, and only after doing so multiple times did Carlos muster the strength to put his friend out of his misery. Alternatively, if the player encounters Nikolai Zinoviev in the sales office, Nikolai ruthlessly executes Murphy, despite Murphy pleading for his life.

Murphy throwing grenades at zombies in the game intro 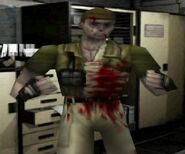 Murphy pleading with Carlos to kill him before he turns.

Retrieved from "https://residentevil.fandom.com/wiki/Murphy_Seeker?oldid=811919"
Community content is available under CC-BY-SA unless otherwise noted.