In 2009 the National Entertainment Collectibles Association (NECA) made its first and only series of Resident Evil 5 figurines, totaling at just three. They were re-released a year later in Japan as part of the "BIOHAZARD 5 ALTERNATIVE EDITION" (Resident Evil 5: Gold Edition). 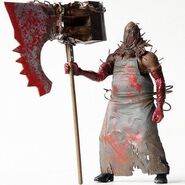 Retrieved from "https://residentevil.fandom.com/wiki/NECA/Resident_Evil_5_Series_1?oldid=800731"
Community content is available under CC-BY-SA unless otherwise noted.