Nanan Yoshihara (died 2012) was a Japanese mass murderer who perpetrated the Marhawa Desire in 2012. Yoshihara and her co-conspirator Bindi Bergara were students at Marhawa School in Northern Kudahnkan where Yoshihara was seriously injured in an accident and kept alive after contracting C-Virus. The two, under the supervision of Dr. Carla Radames, went on to commit a series of murders over several days which culminated in Yoshihara's deliberate release of the virus across the school, leading to dozens contracting Cannibal Disease and killing and eating their fellow students and faculty members. Yoshihara was killed by Piers Nivans during the raid on the school by the Bioterrorism Security Assessment Alliance, but the actual nature of the incident was kept a state secret.

Yoshihara was the daughter of Taro Yoshihara, an influential Japanese restaurateur. In 2011, Yoshihara was enrolled at Marhawa School, a private school which catered to the children of wealthy Asian businessmen. The start of the school year coincided with the sudden decline of the family business, leading to the family declaring bankruptcy soon after Yoshihara's arrival.[1] As word of the collapse spread, Yoshihara found herself victim to bullying from her classmates, led by Alisa Lin, which soon escalated from name calling to vandalism. After being physically threatened by Yoshihara over the bullying, Lin orchestrated a raid on her bedroom, destroying her possessions and sending her to the infirmary. As part of school policy under its head, Mother Gracia Delanikos, the police were not called to press charges and no incidents of bullying were investigated despite protests from Bindi Bergara, the President of the Student Council, who she became increasingly reliant on for friendship.[1]

In the two months after the assault, Yoshihara and Bergara planned a break-out with the intent of warning the authorities about the poor conditions of the school. When it came time to escape, the two damaged several security vans and assaulted multiple guards before running into the woods.[1] Having failed to anticipate the school having a second garage, they were quickly cut-off before reaching any highways, and violently fought back attempts to restrain them, including a hit from a stun rod. During the scuffle, Yoshihara tripped and hit her head on a rock, quickly losing conscious from the resulting brain haemorrhage.[2]

Yoshihara's body was returned to the school and taken to the infirmary where her condition was determined to be terminal. During her time there, Bergara was contacted by Dr. Carla Radames, chief researcher for The Family. Having determined the isolated school as a suitable test site for the Crystalid Virus bioweapon, Radames chose the two girls as her accomplices and offered the virus as a means of saving Yoshihara's life and enacting vengeance against Delenikos.[2] Infected with the prototype Lepotica strain, Yoshihara mutated to develop breast-like tissue growths on over much side of her body, which were capable of releasing airborne particles containing the virus. These growths continued to change her body over time, resulting in her arm become more tentacle-like.[3] To The Family, she was designated "Subject C-16".[4]

Having been in a terminal condition in the infirmary, Yoshihara was assumed dead by the school faculty, and a cover-up was put in place that she had been transferred to another school owing to her family's financial problems.[4] Yoshihara was kept hidden across the campus, both in Bergara's bedroom and in a generator room, and was given frequent doses of a drug supplied by Radames to stabilise her condition, which would keep what remained of her intelligence.[3] In the event she was spotted, she was provided with a black hooded raincoat that covered-up the mutant flesh. Either on Radames' command, or sensing an opportunity, Bergara and Yoshihara began their attacks three months after her "death".[5]

The first victim was Ra-Na Bae, one of Yoshihara's bullies, with Yoshihara sneaking into the vacant room while she made fun of the school transfer to Bergara. Bae was infected with C-Virus after being exposed to the airborne particles, and killed and ate another student before being captured by security.[6] This attack was covered-up, though an informal and undercover BSAA investigation was started. Several days later, Bergara brought Yoshihara over to Lin and was also infected, being detained after mauling investigator Ricky Tozawa. Soon after, another student was infected and sent out in a failed attempt to kill Delenikos.[7] After this, Yoshihara hid in the generator room waiting to be called again, but this went awry when a team entered the room as part of an inspection. In her escape from the room, five workers were infected.[6] As this was again covered-up, Yoshihara was sent out to infect students at the annual festival before going to the rooftops to hide.[5] There she was ambushed by Tozawa, Dr. Doug Wright and security guard Tahir Kapoor. Forced to defend herself, Yoshihara succeeded in mutilating Doug with her tentacle and infecting Kapoor before rushing to Bergara's room for safety.[3]

With Yoshihara's discovery and the successful cover-ups of each incident, the duo's plot collapsed. Under Bergara's instructions, the following morning Yoshihara revealed herself to the students once more and began moving around the school, infecting anyone in her path, the result being that those in hiding were attacked and killed by her victims.[8] This massacre coincided with the arrival of a BSAA team led by Cpt. Chris Redfield. Having completed her spread, Yoshihara turned her attention to the BSAA and followed them into the generator room where she engaged Redfield in close-quarters-combat, but was eventually bested when he overpowered her and cleaved her body in two.[9] Still alive, Yoshihara's upper body was recovered by Bergara, herself now a mutant, who carried her in search of the operators who wounded her friend, tracking them to the school heliport. Despite her injuries, Yoshihara was able to grow a tentacle and lunged at Merah Biji, mortally wounding her and grabbing hold of the helicopter seeking to bring it down. A third operator, Lt. Piers Nivans, shot at Yoshihara with a heavy machine gun, which destroyed what was left of her body and sent her falling to the ground.[10] In her final moments of consciousness, she saw a vision of Bergara telling her they had finally done enough. Soon after, her body was discovered by Radames, who recovered a DNA sample to refine the genetics of Lepotica B.O.W. product line.[10]

Following the incident, the BSAA and Kudahnkan government came to an agreement the massacre be covered-up. All students and staff were officially declared dead in an unspecified accident, with Yoshihara named as one of the victims rather than the attackers.[11] 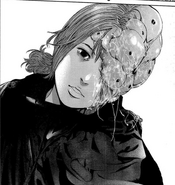 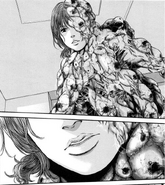