watch 02:39
The Loop (Games)
Do you like this video?
Prime universe
(Capcom's primary storyline)

The Ndipaya are an ethnic group inhabiting West Africa in and around the Kijuju Autonomous Zone, and who reside within the marshlands upriver from the city of Kijuju as well as an ancient underground city nearby. The native Ndipaya language is unknown, though by the 21st century many spoke English and Swahili. The Ndipaya population following the 2009 Kijuju Autonomous Region Incident is uncertain, though is believed to be low following combat with units of the Bioterrorism Security Assessment Alliance.

How old Ndipaya society is uncertain due in part to a cultural secrecy around their origins. What is known is that hundreds or thousands of years ago the Ndipaya discovered a cavern on the edge of the marshlands, inside which lay flowers which under conditions unique to only one area of the cavern would produce an RNA Virus. Exposure to the virus caused a fatal sickness to almost all who consumed the plants, though at least one man was able to survive exposure and as a result mutated into a powerful being beyond any human abilities. While the Ndipaya may have had a number of rulers over this period of their history, their folklore suggests a single mutant king living for centuries. During this time the Ndipaya constructed a massive city in the cavern, using engineering skills far in advance of any other civilisation on Earth. Complex use of reflective materials allowed sunlight to reach the city, with concentrated light being used as high-powered lasers to defend the Garden of the Sun, where the flowers were protected from prying eyes. A staircase was constructed which those claiming the right to be king would climb to consume the flowers, which became known together as the "Stairway of the Sun".

The decline of the Ndipaya Kingdom is believed to have been sudden. As indicated by murals detailing their history, a number of animals were mutated from exposure to Progenitor, either accidentally or intentionally, and became dangerous creatures. They were confined to lower levels of the sinkhole, with human sacrifices conducted to keep them fed. These creatures eventually escaped from the sinkhole and massacred the citizens, killing the King in the process, and forcing the survivors to flee. Though the refugees returned to the marshlands, they always intended to one day return with a new king.[1] To keep the city safe, it became tribal law that all men between the ages of 13-25 serve in their army and guard the city from intruders, and that knowledge of the ruins could never be spoken to outsiders.[1]

The first known contact with Europeans took place in the mid-late 19th century, in the form of an expedition led by Henry Travis, son to a prominent British merchant family. Travis' encyclopedia of Africa contained remarkably detailed insight into the Ndipaya folklore, though was largely ignored by audiences.[2] Travis' writings later inspired an Anglo-American eugenics circle in mid-1966 to explore the region to find the elusive flower, which was hypothesised to be the source of a virus they dubbed Progenitor. The expedition fought with the Ndipaya soldiers for three months until the flowers and virus were discovered and confirmed to exist, upon which they left in December.[3] A second expedition took place in April 1968, when the first expedition failed to produce the virus from the flowers. Faced again with Ndipaya attacks, a third expedition directly confronted the soldiers, and by August the Ndipaya had lost control of half of the city including the Garden of the Sun. Many Ndipaya defenders perished not by guns but by the effects of the Progenitor virus disease before they lost the Garden.[1] Two weeks following the capture, construction began on a research facility for researching the flowers, with soldiers continually paid well to keep the Ndipaya out.[4] At some point following the closure of the facility in 1998, the Ndipaya began moving back to the ruins, though were unable to prevent Tricell Inc., Africa's construction in its place.

In the years following their driving out of the city, the Ndipaya also lost control of much of the wetlands to Tricell, which was interested in oil exploitation.[5] Though confined to the crocodile infested marshes, they were kept safe by complex engineering knowledge which had survived the fall of the kingdom, and relied upon a wood and rope transport system comparable to a sky-tram for longer distance transport. In 2008, the Ndipaya in the wetlands became the focus of bio-weapons testing, and were deceived into taking injections of Type-3 Plaga eggs.[5] The Plagas killed the women and children in their attempts to take over their hosts' bodies, and mutated the men and older boys into powerful and, in some cases, taller forms at a cost of unrivaled aggression towards almost all non-hosts.[5] The massive presence of human skulls and ribcages found thereafter offer the possibility Ndipaya who refused injection were ritually murdered.

In March 2009, the BSAA mission in Kijuju uncovered the testing on the Ndipaya purely by accident, having initially being investigating suspected bioterrorist links in the coastal city. Following information tying the arms dealer, Ricardo Irving, to an oil field on the other end of the marshlands, Delta Team's CO, Captain Josh Stone, was first to discover the Plagas' effects on the Ndipaya, followed soon after by a BSAA rescue party who were violently murdered, with one ritualistically sacrificed to a crocodile. SOA members Chris Redfield and Sheva Alomar killed a number of Ndipaya on their way through their villages to the oil field.

Only bits and pieces are known of the Ndipaya culture. At least three deities were worshipped by the Ndipaya. A sun god responsible for movement of the sun in the sky, and a moon god responsible for the phases of the moon were both worshipped on altars in the forms of a gold and silver idol, respectively.[6][7] A war god was also worshipped in the form of a ceremonial mask said to belong to it.[8] A ritual mask is also known to have been worn, possibly by chieftains, which appears to be a four-eyed elephant with sharp wooden teeth and coloured rope for hair. One of the most important icons in the Ndipaya religion, however, is that of the Sonnentreppe, the flower which contains the Progenitor Virus within its genome. Tribal art typically had flowers adorning them, and following the collapse of the Ndipaya Kingdom the ritual eating of flowers continued on.[1]

The Ndipaya Kingdom's selection of Kings was based around one's ability to survive mutation after consuming the flowers, rather than a son inheriting the title by genetics alone. Whether or not this is recreated by the tribes in their ritual eating of flowers is uncertain. 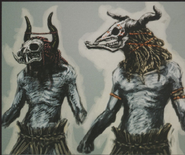 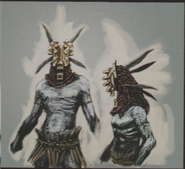 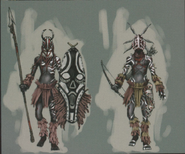 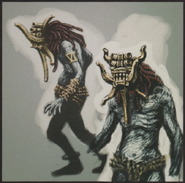 A mural painted over the door into the Pyramid, displaying the flowers of the Stairway of the Sun against an Ndipaya warrior - possibly a King.

A mural nearby the first, detailing the city at its height.

A mural showing the Stairway of the Sun, the King and his subjects, probably during a ritual.

A mural showing the sacrifices that were made to the confined mutants.

A mural painted within the Pyramid, detailing the fall of Ndipaya civilisation at the hands of mutants.

A painting showing the Sun, Pyramid, the "Tree/Roots" and then at the bottom people probably surrounding the Garden. The tree is either referring to how the SotS is a support for the Kingdom and its Kings, or, simply to how the environment is filled with tree trunks and roots between the Pyramid and the Garden.
Add a photo to this gallery

Retrieved from "https://residentevil.fandom.com/wiki/Ndipaya?oldid=858525"
Community content is available under CC-BY-SA unless otherwise noted.