First use of viral bioweaponry

The Ndipaya Kingdom was an ancient West African civilisation which was based near the modern city of Kijuju.

The Kingdom and its city date back untold centuries, and were located within massive caverns, within which grew a flower which contained a retrovirus known as Progenitor Virus. Certain people who consumed the flowers would survive and gain superhuman abilities, and who would inherit the throne as King. Due to the abilities the mutations granted its Kings, the Ndipaya became master engineers, capable of constructing elaborate stone traps and mechanisms otherwise impossible to Stone and Bronze Age peoples. Among these accomplishments were the use of reflective materials to shine sunlight across the cavern as if it was daytime, and the concentration of this light into laser-like beams which could kill trespassers. The city fell into ruin during a battle against mutant animals that had escaped containment. Though the Ndipaya survived, they were without a King, and lacked the capability to repair the city. For centuries afterwards they kept a military presence in the area, while refugees settled in nearby marshland.[1] These ruins were first seen by Europeans in either the late 19th century by Henry Travis, or the exploration of the area led by Dr. Oswell E. Spencer, Earl Spencer.

Caves: The caves serve as the entrance to the kingdom. Chris and Sheva arrive here in Chapter 4-1 via boat driven by Josh Stone. The area is populated by many Bui Kichwa.

Ancient Village: There are many traps set in this location. In certain sarcophagi is gold and jewels, but one sets off a pitfall trap. To exit, the player must navigate past several rolling explosive spheres and reach a stone door before it closes.

Labyrinth: This area begins with an ancient trap of collapsing statues and pitfalls, which the player controls in the form of a quick-time event. Afterwards, the player traverses a labyrinthine set of ruins by pulling chains that change the direction of staircases. A Popokarimu appears near the end and can be killed for a valuable treasure.

Worship Area: Comprising most of Chapter 4-2, the worship area is a large set of structures protected by dangerously concentrated beams of sunlight. Chris and Sheva can stop the beams by killing the Majini that operate the two giant lenses. To advance, players must gather three emblems and place them in the large stone door.

Pyramid: A three-floor pyramid structure with a beam puzzle on each floor. The player must rotate mirrors so that the beam hits an actuator, allowing escape. In the third and final puzzle, the player may optionally open two treasure rooms by directing the beam into the skeleton's orb.

Underground Garden: This is the location of the Stairway of the Sun flower from which the Progenitor virus was extracted. There is little gameplay here except for a BSAA emblem hidden under a walkway.

Monarch Room Entrance: This room is separated from the previous ruins by TriCell's lab. The area is infested with Lickers.

Monarch Room: Albert Wesker, Excella Gionne, and a manipulated Jill Valentine gather here as they prepare to launch Uroboros. Exiting this room via the door atop the staircase leads to the dock where Wesker's ship awaits. 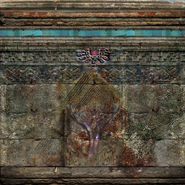 Ndipaya worshipping a purple organism. Plaga parasites are embedded on the wall. 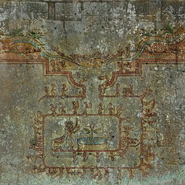 The Ndipaya king in the Garden of the Sun, after exploring the caverns. 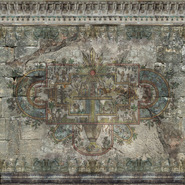 The completed Ndipaya city, home to underground farming. Below the city is the Garden. 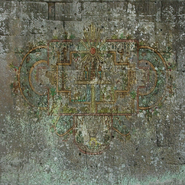 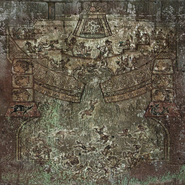 Human sacrifice to mutants. The Stairway of the Sun is top-centre. 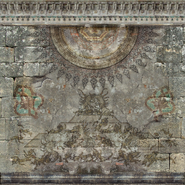 The mutants escape and attack the city. 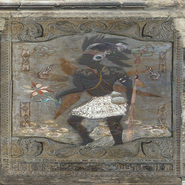 Retrieved from "https://residentevil.fandom.com/wiki/Ndipaya_Kingdom?oldid=827773"
Community content is available under CC-BY-SA unless otherwise noted.