Nemesis appears briefly in Marvel vs. Capcom 3: Fate of Two Worlds. Here he is seen in the Incredible Hulk's arcade mode ending being subdued without much effort. Hulk and Chris Redfield are shown infiltrating a mansion similar to the Spencer Mansion in search of Wesker. Hulk asks who Nemesis is, to which Chris casually replies that he was a monster who tried to kill his partner, Jill. Hulk decides to smash Nemesis for this, and it is assumed that he is soundly killed, as Chris and Hulk confront Wesker soon afterwards.

In his ending, Nemesis is shown with Wolverine like claws; with Spencer and the Director of Marvel's Weapon X program commending each other; the director noting that most of the work was already in place and Weapon X only made "minor improvements" to Nemesis.

In Marvel vs. Capcom: Infinite, he returns as a playable character and as a boss in Story Mode. In Story Mode, Nemesis was summoned by M.O.D.O.K. to dispose of Chris Redfield, Spiderman, Frank West, and Haggar. Despite his efforts (with some assistance from the B.O.W.s), he was ultimately defeated. His fate (along with the New Metro City's A.I.M.brella facility) remains unknown.

In battle, Nemesis is a large target and moves slowly, but compensates that by delivering incredibly powerful melee attacks, as well using his bazooka for projectile attacks (and also melees) and whipping out tentacles from his body for long range affairs. His Level 3 Hyper Combo utilizes his final mutated form where he pulls in the victim with his tentacles and devours them for some major damage. Nemesis says his trademark "S.T.A.R.S." against Chris or Jill. His DLC costume is his second form with his jacket torn off, showing off his bare body.'

Nemesis faced major adjustments when being re-introduced in Marvel vs Capcom: Infinite. These changes include: 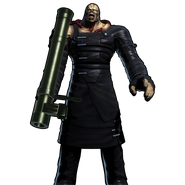 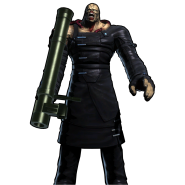 When he was originally considered to be a playable character, Capcom chose not to include him, as the age rating would have been raised due to the nature of his appearance being too "gruesome", which could change the game's rating. Apparently, Capcom had second thoughts about Nemesis' inclusion in Marvel vs Capcom 3, and started working on Nemesis' animations to make him work within a T rated game. A leak revealed his appearance as one of the twelve new playable characters in November 2011's "Ultimate Marvel vs Capcom 3". His inclusion in Ultimate was officially confirmed at Gamescom 2011. His rival in the game appears to be Doctor Strange.[1]

Retrieved from "https://residentevil.fandom.com/wiki/Nemesis-T_Type_(Earth-30847)?oldid=608850"
Community content is available under CC-BY-SA unless otherwise noted.