"Nemesis" is an action figure manufactured and sold by Palisades as part of their "Series 1" line of Resident Evil-themed toys.[1] It is based on the Nemesis-T Type, a boss in Resident Evil 3: Nemesis. A variant of the toy was also released as an exclusive to EB games. This variant features an open mouth and a black rocket launcher as opposed to the normal figure's closed mouth and green rocket launcher. 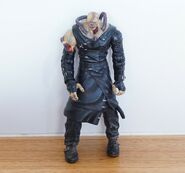 Figure outside of packaging

Open Mouth Variant Outside of Packaging.
Add a photo to this gallery

Retrieved from "https://residentevil.fandom.com/wiki/Nemesis_(Palisades)?oldid=767926"
Community content is available under CC-BY-SA unless otherwise noted.