Nemesis (Type-2) is a toy set by Moby Dick, part of its REAL SHOCK ACTION FIGURE line. It is based on the second form of the Nemesis-T Type enemy from Resident Evil 3: Nemesis. The figure's head can be swapped with a second in the box.

This figure stands about 12 Inches tall and features quite a bit of articulation for a Moby Dick figure. firstly, its shoulders are on a ball joint and capable of rotating and pivoting outwards. The right shoulder does have a tentacle that prevents some movement but it can be removed and placed back in easily after posing.

The head can be rotated 360 degrees, though it looks rather silly as it doesn't use a proper neck joint. The elbows and knees bend forward and backward and the wrists can rotate. This figure also features thigh rotation though the coat remnants make this less apparent. The figure additionally features waist rotation.

The coat remnants are made of a very flexible plastic and are even more flexible than figures with coats (such as Palisades Mr.X) from other lines. The Tentacles are made to be bent into various poses and are found on the right arm, the right hand and on the back.

The head that comes attached to the body fresh out of the packaging features an articulated jaw capable of opening and closing the mouth. The alternate head features a static mouth that remains shut and this figure comes with one of Nemesis Type-3's ribs. 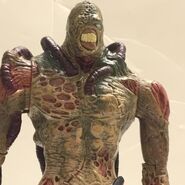 Close Up With Alternate Head

Posed Walking with Alternate Head
Add a photo to this gallery

Retrieved from "https://residentevil.fandom.com/wiki/Nemesis_(Type-2)?oldid=784408"
Community content is available under CC-BY-SA unless otherwise noted.