For other uses, see Nemesis (disambiguation).

Intelligent Tyrant useful as an alternative to Military forces

The Nemesis T-02 was a B.O.W. sent by Umbrella into Raccoon City.

Based on the Tyrant production line, the T02's body was used to host the NE-α Type parasite, which would go on to take control of its motor skills. To take advantage of the viral outbreak in Raccoon City, Umbrella deployed the T02 to hunt down the remaining survivors of S.T.A.R.S.

During its hunt, the T02 malfunctioned, becoming a potential hazard to Umbrella's military plans. To counter this, they sent in a U.S.S. team to knock out the Tyrant and inject it with a new parasite removed from a Nemesis candidate in the B.O.W. testing facility. It then went on to continue its mission, now armed with a missile launcher.

What if: Echo Six

During its hunt for the surviving S.T.A.R.S. members, it happened to stumble upon Jill and relentlessly chased her. Jill fled from the monster, running above the wrecked cars as the Nemesis pursued her In order to stop her, the monster used its sheer strength to throw a big bus, sending it crashing towards the car Jill is standing on. Jill manages to evade the bus by jumping off the car. When the team saw Jill, she shouted at them to run. Together, they tried to eliminate the monster but it was too powerful. Luckily, Jill found an escape route for them just in time and temporarily keeps the nemesis at bay.

There is an Xbox 360 exclusive downloadable multiplayer mode called Nemesis Mode. In it, both teams can attempt to program Nemesis to attack the other while simultaneously attempting to complete their mission objectives.

Nemesis acts differently during his boss fight than he did in RE3, being a lot more similar to his movie appearance.

Changes in the boss fight include: 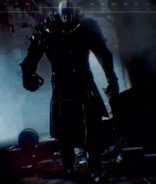 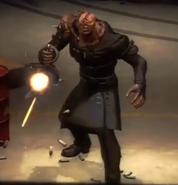 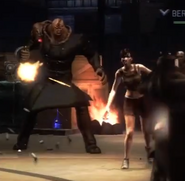 Nemesis after the Clock Tower is destroyed.

Retrieved from "https://residentevil.fandom.com/wiki/Nemesis_T-02?oldid=814469"
Community content is available under CC-BY-SA unless otherwise noted.