Primary C-Virus infection
The Neo-Umbrella J'avo served as C-Virus-infected members of The Family's East Asian paramilitary forces, placed under Carla Radames' control. They possessed the ability to mutate their bodies at will. They also held in their possession at least two aircraft carriers; a high-tech submarine and several attack helicopters and used much of their force during the Lanshiang bioterror outbreaks of 2013.

The Neo-Umbrella J'avo with a green lens on its mask has a higher chance of mutating their body parts and transforming into a Chrysalid compared to ones with a red lens. 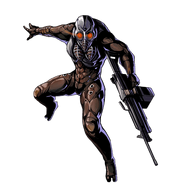