Newspaper Article About the Fall of Umbrella

View source
watch 02:05
Wiki Targeted (Games)
Do you like this video?
Play Sound 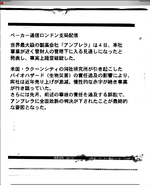 Baker Communications Fax (Umbrella) (ベーカー通信FAX (Umbrella), Bēkā tsūshin fakkusu (anburera)?) is an approximate translation of a fax archived in the BSAA Remote Desktop. This newspaper transcript was used in the viral-marketing of Resident Evil 5 in Japan and, being written by Capcom Japan, is considered a canonical tie-in to the Resident Evil series. Its appearance in Resident Evil Archives II confirmed its status. The transcript is based around a 2003 newspaper article regarding the inevitable collapse of Umbrella Japan, following the bankruptcy of its parent company.

Domestic Branch of Umbrella to Dissolve

Umbrella established its Japanese branch in 1984 for the initial purpose of importing pharmaceuticals developed in America. In 1987, it completed the Umbrella Japan Laboratory, which used biotechnology to pursue independent research and pharmaceutical development.

Umbrella's stocks had been on the decline following accusations regarding the 1998 "Raccoon City tragedy," and the blow to public image has caused its sales to stagnate. With Umbrella recently found liable in the numerous lawsuits filed against them in the wake of that same tragedy, the company was forced to declare bankruptcy.

The Japanese branch of the company has been looking for new sources of funding in recent weeks, but received no offers from pharmaceutical or other companies at home or abroad. The decision to close was made in light of this fact.

Umbrella, one of the world's largest pharmaceutical companies, has announced that its HQ is expected soon to be under the control of a trustee, in fact, the company was bankrupt.

The company's sales have plummeted in recent years due to the impact of Biohazard's pursuit of responsability caused by the company's laboratory in USA's Raccoon City. The business was at a standstill with a trade deficit.
Furthermore, the final factor was the decision of Umbrella's total lose last month in a lawsuit seeking responsibility for the aforementioned accident.