Sergeant Nicholai Ginovaef was a mercenary in Umbrella's U.B.C.S. anti-biohazard force. He took part in the mission in Raccoon City following a t-Virus spill

During his U.B.C.S. career, Nicholai developed a reputation as a suspected traitor, people in his unit frequently dying. This suspicion was confirmed during the 1998 mission, when he offered up the remains of B Squad as a sacrifice to a group of Zombie while running though Raccoon City Hall.

The newly reformed U.S.S. Delta Team encountered Nicholai while taking part in their own mission to the city hall. After witnessing his betrayal of teammates on the building's security feed, they approached him about it. However, he escaped the building during a trap in which he lured over a dozen Lickers into Delta Team's position. Nicholai then began setting up charges to destroy Raccoon City Hospital as part of a covert mission. In the event he was followed, he successfully strapped bombs onto a number of Zombies within the building. He met Delta Team again soon after.

In the level "Corruption", Nicholai is seen using a SIG P226 and a Heckler & Koch PSG-1. Nikolai is playable character in the game's Heroes Mode. He is shown utilizing a sniper rifle and explosives.

Nikolai in ORC on a CCTV camera 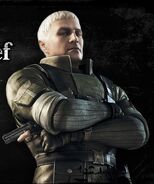 Nikolai meeting with Vector and Spectre

Nicholai's appearance in Resident Evil: Operation Raccoon City was first hinted during the Inserted Evil ARG. His presence was later confirmed when he was added to the list of "Key Persons" on the Japanese website for the game. Furthermore, he appeared in the Gamer's day trailer. released on October 31.

Retrieved from "https://residentevil.fandom.com/wiki/Nicholai_Ginovaef?oldid=796906"
Community content is available under CC-BY-SA unless otherwise noted.