The official residence (, kōtei?) was a palace which served as the official place of residence for the governors of Rockfort Island.

How long the building was on Rockfort is uncertain, as the island was for decades territory controlled by the Ashford dynasty.[1] The seventh Earl, Alfred Ashford, lived there only briefly in 1993 before moving to the newly constructed private residence the following year.[2] The building was modified that year to accommodate a bridge linking the two buildings over a valley.

Access to the palace appears to have been at one time via an ornate marble bridge, but this was destroyed at the time of the outbreak, and instead, one must use the narrow stairway leading from the Training Facility. Also accessible from the palace is a submarine used as an elevator to access the subterranean airport. Hidden at the rear of the palace and accessed from Alfred's office is a narrow covered bridge that leads to Alfred's private residence.

The palace was left inaccessible to Chris Redfield following the island's self-destruct detonation, and was likely either destroyed or heavily damaged.[3]

The palace had been furnished to reflect island commander, Alfred Ashford's militaristic tastes, and included a main hall complete with imposing portrait of Alfred in full military regalia; a display room for his model and gun collection; a gaming room, and a gallery of Alfred's family portraits. More functional rooms include a large meeting room, bathroom, Alfred's own office and a waiting room for visitors.

Entrance of the palace

Entrance of the palace 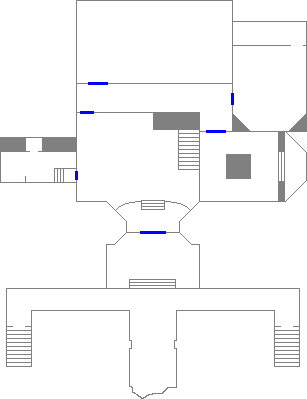 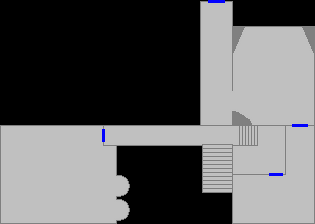