C-Virus (produced by the Ustanak)

Oko are creatures from Resident Evil 6. They share a symbiotic relationship with the Ustanak, being spawned from an organ on its back. Although they have an insectoid appearance, their erratic flight patterns are more indicative of bats. Oko is derived from the Serbian word for "eye".

They were encountered by Jake Muller and Sherry Birkin while in a mining cavern in Edonia, trying to avoid the Ustanak.

As their name implies, Oko act as scouts for the visually impaired Ustanak. Ironically, they have no eyes of their own, instead relying on ultrasonic waves to track their prey. They're very small and mobile, flying on two wings that closely resemble those of a bat. Their sense organs are shared with Ustanak - when a target is found, they emit a flash and flap their wings to emit ultrasonic waves that only Ustanak can detect. (The mechanism behind this shared sensory perception is unknown.) Their ultrasonic waves cannot pass through walls and other barriers.

The primary feature is several glowing tumors on their body. When they are solitary and away from danger, the tumors are colored a bright blue. However, when they sense something nearby, the tumors suddenly turn red and they let out a loud, piercing shriek akin to a siren.

The Oko are deployed by Ustanak in the underground cavern of Edonia to hunt down Jake and Sherry. They proceed to patrol the area in search of any disturbances - if an Oko detects such an event, it will quickly alert the Ustanak, drawing it towards the source of the disturbance.

Shooting these creatures is not recommended as the sound will draw the attention of the Ustanak while it is hunting for you. Wait for an opening, observe its moments and run up behind it while its light is turned away. You'll be prompted for a contextual attack that will instantly smash and kill the creature without alerting the Ustanak. Running does not alert this creature to your presence.

Shooting an Oko out of the air is possible, but as you have only two chances of hiding while the Ustanak is hunting you, it is highly recommended to use a powerful gun to kill the monster with one shot, such as the Elephant Killer or the sniper rifle.

Sherry taking a shot at an Oko

A zoom in on the Oko

Sherry stomping an Oko to death

Sherry smashing the Oko to death

Jake detected by the Oko.

Jake detected by the Oko

Jake sneaking up on the Oko 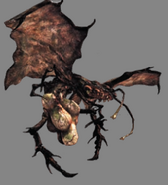 Retrieved from "https://residentevil.fandom.com/wiki/Oko?oldid=803400"
Community content is available under CC-BY-SA unless otherwise noted.