View source
watch 02:23
Wiki Targeted (Games)
Do you like this video?
Play Sound
For the file in the RE2 remake, see Operation Report (RE2 remake).

Memory of a Lost City 2

Operation report 1 (作戦報告書1, Sakusen hōkoku-sho 1?) is a file that can be found in Resident Evil 2 and Resident Evil: The Darkside Chronicles.

In Memory of a Lost City 2, in the Conference room corridor by shooting the boarded window to the left of the 3 zombies that come up.

——Operation Report——
September 26th
The Raccoon Police Dept. was unexpectedly attacked by zombies. Many have been injured. Even more were killed. During the attack, our communications equipment was destroyed and we no longer have contact with the outside.

We have decided to carry out an operation with the intent of rescuing any possible survivors as well as to prevent this disaster from spreading beyond Raccoon City. The details of the operation are as follows:

Security of armaments and ammunition.

Chief Irons has voiced concern regarding the issue of terrorism due to a series of recent unresolved incidents. On the very day before the zombies' attack, he made the decision to relocate all weapons to scattered intervals throughout the building as a temporary measure to prevent their possible seizure. Unfortunately, this decision has made it extremely difficult for us to locate all ammunition caches. It has become our top priority to recover these scattered munitions.

To unlock the weapon storage.

As stated earlier, it will be extremely difficult to secure all the ammunition. However, a considerable supply still remains in the underground weapon storage. Unfortunately, the person in charge of the card key used to access the weapon storage is missing and we have been unable to locate the key. One of the breakers went down during the battle and the electronic locks are not functioning in certain areas. It has become a top priority to restore the power in the power room and secure those locks.
Recorder: David Ford

——Operation Report——
September 27th
1:00 PM. The west barricade has been broken through and another exchange ensued. We sheltered the injured in the confiscation room on the first floor temporarily. Twelve more people were injured in the battle.
Recorder: David Ford

—Additional Report—
Three additional people were killed following the sudden appearance of an as of yet unknown creature. This creature is identified by missing patches of skin and razor-like claws. However, its most distinguishing characteristic is its lance-like tongue, capable of piercing a human torso in an instant. Their numbers as well as their location remains unknown. We have tentatively named this creature the "licker" and are currently in the process of developing countermeasures to deal with this new threat.

-Operation Report- September 26
This Raccoon Police Department has produced a large number of deceased and injured due to the sudden zombie attack. The communications equipment was damaged on this occasion. Communication with the outside has become impossible.

An operations will be held as scheduled to prevent the expansion of damage and rescue survivors probably still in the station. I'll record the operation discussion here.

・Securement of Weapons, Ammunition
The day before the zombie attack, the Chief was concerned about terrorist activity from the repeated mysterious cases lately. In consideration of the armory being taken over, he decided to temporarily scatter weapons everywhere.
Unfortunately, because of it, we weren't able to keep tabs on the location of ammo.
The first thing we'll do is collect the ammo scattered in the station.

・Unlock the Armory
As described above, securement of ammo will be extremely difficult. However, many should still be kept in the underground weapons storehouse. The supervisor of the key card for opening the armory is missing and we don't know the card's location.

In addition, since some breakers fell at the time of the battle, the electronic lock of the specific division isn't functioning. We must aim to recovering electrical power in the power room.
Recorder, David Ford

-Operation Report- September 27
At 1:00pm, the western barricade in the police station was broken through, causing a battle.
We temporarily sheltered the injured in the 1F seized property storehouse, but no less than twelve victims have been taken out with this battle.
Recorder, David Ford

〜Additional Report〜
Three lives were claimed by a monster that suddenly appeared.
It looks bizarre, as if the skin of its entire body has been stripped, with sharp claws... however, slashes with its tongue are the most horrible.

The thing freely manipulated its elastic tongue, sharpened like a spear and pierced into the hearts of the three in an instant
In addition, we don't know where it lurks.
We've decided to name the thing "Licker" and take countermeasures immediately.

September 26th
The Raccoon City Police Department was unexpectedly attacked by zombies.
Many have been injured.
Even more have been killed.
During the attack, our communication equipment was destroyed and contact outside of the city was lost.

Those of us that remain have decided to enact our own contingenzy plan with the intent of rescuing any possible survivors as well as preventing this disaster from spreading beyond Raccoon City.

September 27th
1:00 P.M. The west barricade has been breached and another exchange ensued.
We sheltered the injured in the confiscation room on the first floor temporarily.

Twelve more people
were injured in the battle.

-Additional Report-
However, its most distinguishing characteristic is its lance-like tongue which is capable of piercing even a police tactical vest. Their numbers as well as their location remain unknown.

We have tentatively named this creature the "Licker" and are currently in the process of developing countermeasures to deal with this new threat.

Its location in the "A" scenario in RE2

Its location in the "B" scenario in RE2

Its location in Darkside Chronicles 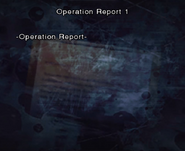 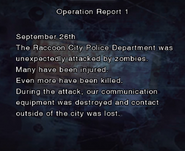 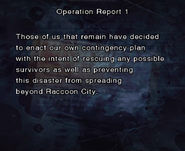 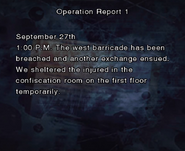 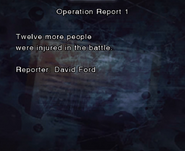 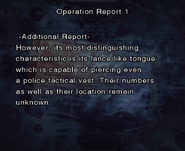 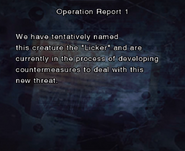