Special mutation
Pale Heads are a variety of human mutant created from exposure to the ε strain. It is uncertain if this is another aspect of the V-ACT effect or a totally separate mutant from the zombies, as research on them ended before the mutations could be reliably re-produced in new test-subjects.

Pale Heads were first observed in August 1998 during bioweapons combat data testing in Raccoon City's NEST-2 facility. Due to the unpredictability of them being created, the facility's Shipping and Processing Manager, Gabrielle Reed, insisted weapons that could counter Pale Heads be made available in the event of an escape.[1] To reliably re-produce the mutation, the bioweapons research team requested Police Chief Brian Irons to assist in the transportation of abducted humans to serve as these test-subjects.[2]

When the t-Virus spread across Raccoon City, the population of Pale Heads was free to take over in the ensuing panic along with other B.O.W.s, and NEST-2's personnel were massacred. 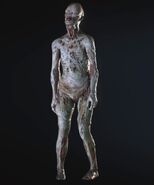