Paradise was a prison located on Sheena Island.

Paradise's origins lie with the Tyrant Project. Tyrants required an undamaged brain to mutate and mature, and to guarantee this Umbrella required a large source of β Hetero Nonserotonin, a hormone produced in late-stage puberty. To advance Tyrant Production, Commander Vincent Goldman had teenagers abducted from across the globe and confined in Paradise. From there they would be studied and, if found adequate, taken to the Tyrant Plant to be vivisected and the hormones extracted. As Umbrella controlled the island, the residents were well aware that people were being held there, but were assured they were being looked after for a noble purpose. Fulfilling something of an open-prison policy, prisoners were allowed to take in the local entertainment such as its nightclub or video arcade. Despite allowing prisoner recreation, Paradise was a harsh environment and guards were more than prepared to executed inmates in its "playing field". In October 1998 the prison experienced a break-out when its entire population became aware of their inevitable deaths. All prisoners were captured and executed in their cells by Commander Goldman, personally. 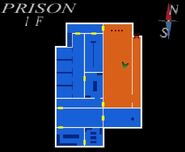 The playing field
Add a photo to this gallery

Retrieved from "https://residentevil.fandom.com/wiki/Paradise?oldid=856700"
Community content is available under CC-BY-SA unless otherwise noted.