The Parasite Super Tyrant is the result of an NE-β Type parasite taking over the body of a Tyrant (T-103 Model). It serves as the "final boss" of the second Echo Six Expansion Pack for Resident Evil: Operation Raccoon City, encountering the team in this form at the end of the "Longest Yard" scenario

When destroying the B.O.W. Programming Lab, Echo Six unwittingly activated a T-103. Chased by the Tyrant throughout the lab, they eventually escaped it via an elevator. It was soon after attacked by the parasites and became a powerful new foe.[1]

As Echo Six converged on the position of RPD officer Leon Kennedy, the Tyrant attacked the squad in a large ditch just outside the train yard.

The creature displayed strong resilience to gunfire during the battle, but due to the parasite's strain on the Super Tyrant's body, sensitive openings in its flesh became more vulnerable. After taking a significant amount of damage, the creature eventually falls. As Echo Six, Leon, Claire Redfield, and Sherry Birkin approached the body it springs to life ready to continue fighting. An Echo Six member (the one controlled by the first player) springs into action; fires several rounds from his/her assault rifle at point blank range and then shoves a fragmentation grenade into the creature's torso, the resulting explosion killing it for good.

After being caught in the explosion of the lab, the T-103 Tyrant was still wearing its Limiter Coat. However, the parasites that had run rampant in the lab survived the explosion, eager to take over new hosts. Many converged on the Tyrant, which was still alive but was too weak to resist the vast numbers of parasites. One eventually locked itself into the Tyrant, causing to undergo a strange mutation.

This mutation is most likely what caused the Tyrant to lose its coat and transform into the Super Tyrant. In this form, the Parasite on its back has grown quite large, easily able to carry the Tyrants body by itself. Its new strength enabled it to throw large storage containers and even knock back enemies simply by swiftly moving its legs.

The Tyrants exposed heart, usually, the default weak spot on many Tyrants is covered by a part of the parasite's mutated carapace and becomes exposed when it takes too much damage. This allows it to employ a rather strange projectile attack by shooting liquid from the opening. Whether this is blood, venom, acid, or something else entirely is never revealed.

The Parasite Super Tyrant is by far one of the toughest enemies in the game. Even with concentrated fire on all of its weak spots, it takes the entire squad of four over ten minutes to defeat it.

The Tyrant has two different movement styles that it employs after taking a certain amount of damage. One is its regular walk, where the Tyrant moves and the parasites legs can reach out and attack enemies. The other is a fast, spider-like walk where the parasite carries the Tyrants body around the area. The latter form is when its least vulnerable to gunfire and explosions.

When it takes enough damage, the Tyrant will crouch on the ground for a short period of time, allowing the player(s) to concentrate fire on its glowing weak spots.

At several intervals during the battle, zombies appear to attack the player(s) which can potentially become Crimson Heads. As enemies, or as allies under Shona's control, the creature's knockdown attack effects everyone. And can even destroy a zombies body entirely. 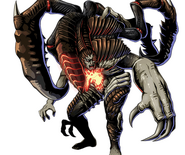 Parasite Super Tyrant in Minna to BIOHAZARD Clan Master.
Add a photo to this gallery

Retrieved from "https://residentevil.fandom.com/wiki/Parasite_Super_Tyrant?oldid=704031"
Community content is available under CC-BY-SA unless otherwise noted.