Patrick Reyes was a Zookeeper at the Raccoon Zoo.

Both he and Lloyd Stewart had been injured by the infected zoo animals roaming the area, and chose to await rescue inside the zoo. The player will find him hurt in the Elephant Stage control room. When talked to he will be in despair.

However, on Hard mode or higher, if the player talks to Austin Taylor first and then comes back to talk to him, he will reward the player with Shotgun Shells.

He is unlocked as a playable character in a two character set with Lloyd upon completing the "wild things" scenario on any difficulty and purchasing them in the collections menu for 3000 points. He is a George-type character so he has access to George Hamilton's medicine kit. He starts with a mixed Red and Green Herb as his extra item which is useful for his medicine kit.

A statless second version of Patrick exists that is presumably used for a zombie version of him. This version can only be obtained via a game enhancing device such as gameshark. In order to actually be usable, his stats will need to be modified with a character stat modifier code. If this is not done, this version will be unable to cause damage and will run very slow. 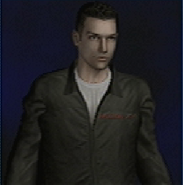 Patrick in the Collection menu of File #2.
Add a photo to this gallery

Retrieved from "https://residentevil.fandom.com/wiki/Patrick_Reyes?oldid=749293"
Community content is available under CC-BY-SA unless otherwise noted.