In Resident Evil 2, the file is obtained in the file storage room on the first floor of the Raccoon Police Station after unlocking the door with the Spade Key. Upon entering the room, the file can be found on either side of the shelf directly across from the entrance.

In The Darkside Chronicles, the file can be found during the Memory of a Lost City 3 scenario. Upon entering the 2F east passage, Leon and Claire will turn right down the hall, come to a corner with a painting on the left wall, and then turn right again where they encounter a group of zombies. Shoot the ceiling light above them to reveal the file.

—Patrol Report—
September 20th 9:30 PM
Reporter:Sgt.Neil Carlsen
We received a report of a suspicious individual skulking around the sewers in the outskirts of Raccoon City. I searched the area and located the individual, but he ran away before I was able to question him.

I recovered the following items:

We received a report of a suspicious individual skulking around the sewers on the outskirts of Raccoon City.
I searched the area and located the individual, but he ran away before I had a chance to question him
I recovered the following items:

The location of the file in Resident Evil 2.

Its location in Darkside Chronicles. 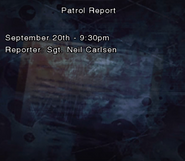 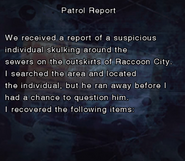 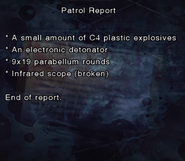 This file alludes to Operation: NESTWRECKER that the Umbrella Security Service's "U.S.S. Alpha Team" took part of, under agent HUNK's command. The timing is some time before Police Chief Brian Irons received word that Dr. William Birkin had been assassinated and that the t-Virus had been leaked into Raccoon City. It can be assumed, therefore, that Sergeant Carlsen interrupted the U.S.S.' operation in the sewers, or that he interrupted a pre-mission event - to search for a way into Birkin's lab, for example.