watch 02:34
Wiki Targeted (Games)
Do you like this video?
Play Sound

Fabiano served as the localization director for Resident Evil: Revelations.[1]

Fabiano took on a wider role during development of Resident Evil 7: Biohazard than other games. With the game using photogrammetry, Fabiano was hired on as a model for the character of Peter Walken. Close to the game's release, he played Walken again in a series of live-action promotional tapes sent to various reviewers, titled "Get this to" followed by the name (e.g. "Get this to Fangoria!").

As a Producer, Fabiano represented the Resident Evil 7 - GDC 2017 Conference, alongside Koshi Nakanishi.

While Resident Evil 7: Biohazard was in late-stage development, Fabiano also took on the role of Producer for Resident Evil 2.[2] 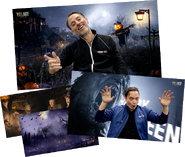 Peter as part of the Halloween with Village promotion.
Add a photo to this gallery

Retrieved from "https://residentevil.fandom.com/wiki/Peter_J._Fabiano?oldid=896671"
Community content is available under CC-BY-SA unless otherwise noted.