Dr. Peter Jenkins was a researcher and lecturer at the prestigious Raccoon University, and a friend of George Hamilton. Peter assisted in the creation of "Daylight "; a vaccine able to halt the t-Virus infection.

Peter met Dr. Greg Mueller earlier in 1998. Greg informed him of the "t-Virus", a highly-mutagenic zoonotic virus being developed by the international pharmaceutical enterprise, Umbrella. It wasn't until the virus was already within Raccoon City, having originated from multiple sources, such as the infested Arklay Mountains, that the antidote was discovered.

At some point, Peter eventually became suspicious of Greg's knowledge of the t-Virus, believing him to be in some way involved with its creation, and was scared for his life upon realizing that he and Greg were the only two people with knowledge of Daylight's research. Hiding important notes throughout Raccoon University, Peter planned on having George retrieve them and create the antidote instead in the event that he died.

Peter's suspicions proved correct, as he was eventually murdered by Greg, being shot in the back of the head in his private study. He was found by George and two other survivors early on October, 1st, and his scattered notes provided enough knowledge for the group to create the antidote themselves.

Peter Jenkins is a Jim-type character. He starts each game with the Anti-Virus capsule. In the Underbelly scenario on EASY and NORMAL, he also starts with the Employee Area Key, giving him instant access to the subway's employee areas. This also happens with every Jim-type characters. 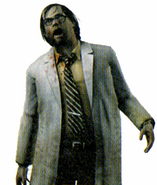 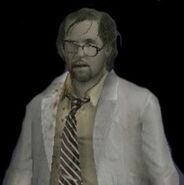 Peter's character model.
Add a photo to this gallery

Retrieved from "https://residentevil.fandom.com/wiki/Peter_Jenkins?oldid=811390"
Community content is available under CC-BY-SA unless otherwise noted.