Peyton Wells was a S.T.A.R.S. police officer involved with the Raccoon City Incident.

Peyton was among the officers, along with friend and fellow S.T.A.R.S. member Jill Valentine, in assisting the civilians of Raccoon City to safely evacuate the city as it was under siege from a viral outbreak and the growing number of Undead that was to follow. As each citizen were being examined by Umbrella's Security team for any exposure to the biohazard before passing through the secured main gate, one of the civilians was already infected with the T-virus and died. Peyton tries to advice everyone to stay clear of the deceased individual, only for the same dead civilian to quickly reanimate and attack Peyton, biting (and infecting) him on his right lower calf. The Undead civilian was quickly euthanized by Jill. This scene prompted Umbrella official Major Cain to seal off the main gate, trapping the survivors inside the city, and insist that all remaining citizens return to their homes, citing the situation in Raccoon City as being under control. As the civilians refuse to comply and try to pass through the only means of escaping the city, Cain advices his team to use lethal force if necessary to completely secure the gate. Peyton and Jill, witnessing Umbrella fire off warning shots, yells for every survivor to fall back from the main gate.

After Umbrella closed off the city, Peyton and Jill, along with reporter Terri Morales, hid in a church, in order to find some measure of safe refuge from the growing Undead population. While inside, they meet with another survivor named Angus Mackenzie, who while armed with a gun and in a state of paranoia, demand that they leave the Church. Soon after, they are besieged by lickers, which kills Mackenzie, forcing Jill and Peyton to fend off the creatures. The two are outmatched until they are saved by Alice. As the four survivors find a way to escape the city, making their way through a graveyard in the process, Peyton's growing infection is sensed by Alice, who quickly attempts to kill Peyton. However, Peyton is defended by Jill, who decides to take on the responsibility of handling Peyton should he die from the infection. Although Peyton had grown to dislike Alice immediately because she insisted on killing him before he became an Undead, he was also worried about Alice's predictions of his reanimation as well as trying to kill his friends. The group are quickly attacked by a group of Undead rising from their graves, narrowly escaping them.

Soon, Dr. Charles Ashford recruited the four of them to save his daughter, Angela Ashford, who is hiding at her school in exchange for safe passage outside the city. They have also learned through Dr. Ashford that in order to cover up the Biohazard Incident, by sunrise, Umbrella will utilize a Tactical Nuclear Warhead to "sanitize" all of Raccoon City which will wipe out the Biohazard and all evidence of it, with a critical explosion from the City's Power Plant as a guise for the destruction. Outraged, Peyton at first believes that not even Umbrella are capable in carrying out this operation, until Jill reminds him of what had transpired earlier at the City's main gate and how far Umbrella are willing to go to cover their tracks. Realizing how dire the situation is and that time is running out, they set off to find Dr. Ashford's daughter and work to escape the city alive.

Peyton and the rest of the group made their way towards the school where Angela is said to be hiding. Almost immediately afterward, however, he is killed by the Nemesis, which devastates Jill. Given that he was bitten by an Undead prior to his death, being fatally gunned down by Nemesis speeds his rate of infection and Peyton is eventually reanimated by the T-Virus and attempts to bite Jill and Terri during their attempted escape from the Nemesis in an abandoned car. Jill fends him off and pushes him back long enough to shoot him point blank in the head. His death was instantaneous. Jill drives off with her upset that she had to kill her partner.

Peyton as seen in Apocalypse. 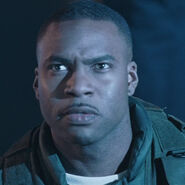 Peyton with Jill and Terri. 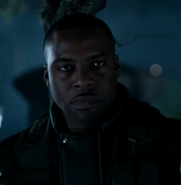 Alice tells Jill and Peyton that she senses something down there.

Undead Peyton attacking Jill.
Add a photo to this gallery

Retrieved from "https://residentevil.fandom.com/wiki/Peyton_Wells?oldid=838835"
Community content is available under CC-BY-SA unless otherwise noted.